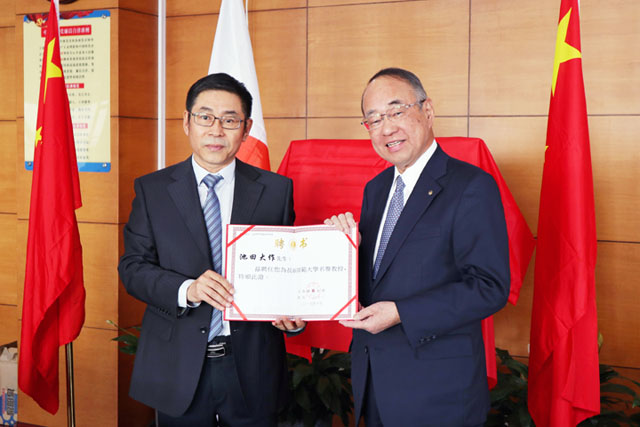 On November 7, 2019, Changchun Normal University (CNU) in Jilin Province, China, presented an honorary professorship to Soka University founder Daisaku Ikeda for his promotion of China-Japan friendship and his consistent efforts to advance world peace. The conferral took place at Changchun Normal University in conjunction with the establishment of the Daisaku Ikeda Culture Research Institute. The ceremony was attended by researchers of Daisaku Ikeda’s philosophy from Japan, China and Korea. Yasunori Tashiro, Soka University Board of Trustees chair, accepted the award on Mr. Ikeda’s behalf.

The university has its origins in the Changchun Normal Learning Center founded in 1906. CNU was one of the first universities to participate in the State Council of China’s education project to improve education in rural agricultural areas of China.

At the award ceremony, Party Committee Secretary Li Weiwei remarked that Mr. Ikeda is highly respected by the Chinese people as a philosopher and educator and that he has made notable contributions to advancing Sino-Japanese friendship and world peace. He stated that the newly founded Daisaku Ikeda Culture Research Institute would help provide students and faculty with a new platform for academic and cultural exchange. He expressed his hope that the institute would help promote dialogue and collaborations among researchers from both within and outside CNU based on the thoroughgoing study of Daisaku Ikeda’s philosophy, pedagogy and peace ideals.

Vice President Han Dongyu of Northeast Normal University, also located in Changchun, stated that, in addition to advancing Sino-Japanese friendship, Mr. Ikeda was instrumental in helping to ease Sino-Soviet tensions. Further, without the contributions made by Mr. Ikeda, Soka Gakkai and Soka University, he remarked, the ties that have been established between China and Japan might not have come to fruition. 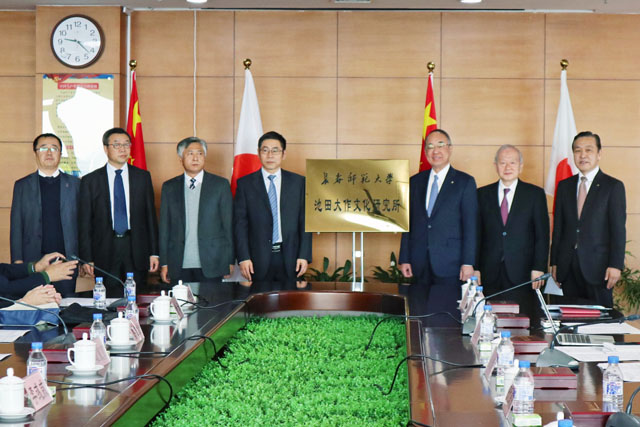 Chinese, Korean and Japanese scholars and other representatives take a commemorative photo with the plaque bearing the title of the new research center: Daisaku Ikeda Culture Research Institute

Following this, CNU Professor Zhang Yangang, newly appointed director of the Daisaku Ikeda Culture Research Institute, spoke about his hopes for the institute to become the access point for fully comprehending Mr. Ikeda’s philosophy from a cultural perspective through interdisciplinary research. He envisioned the institute developing a network and repository for empirical research based on the principles of coexistence in support of Sino-Japanese and peace exchanges.

In his message, Mr. Ikeda conveyed his heartfelt gratitude for the honor. He shared three essential points for shedding light upon the future of global society. First is “the spirit of not forgetting one’s origin.” He said that by constantly returning to the starting point, both one’s life and society are rejuvenated and are able to advance with hope. The abiding friendship forged between the two countries, he said, has its origins in the great debt Japan owes China, its cultural benefactor. Second is “the spirit of perpetual learning” in keeping with CNU’s motto, “There is no limit to the pursuit of learning. Be a teacher and role model through your actions.” The former Chinese Premier Zhou Enlai, he said, was a leader who exemplified this motto. Third is “the spirit of illuminating the people’s lives.” He stressed the tremendous value gained, for society and the world, through interacting with people from diverse cultures, “illuminating” their lives and helping each person draw forth their inherent potential. He commended CNU for its in-depth study of the various ethnic cultures of China’s northeastern region, as well as for creating on campus a study hall for the exclusive use of women faculty and students, which has become a source of inspiration for women. Mr. Ikeda concluded his remarks by sharing his hope that Changchun and the new research center bearing his name would continue to illuminate one person after another and help unfold humanistic education and culture that would help bring peace, happiness and prosperity to the diverse ethnicities throughout the world.

Following the conferral ceremony, an academic symposium on Mr. Ikeda’s peace ideals was held, together with a cultural exchange meeting between the Japanese, Chinese and South Korean scholars at the CNU campus. Some 20 researchers from various fields took part in the discussions.

[Adapted from articles in the November 14, 2019, issue of the Seikyo Shimbun, Soka Gakkai, Japan]