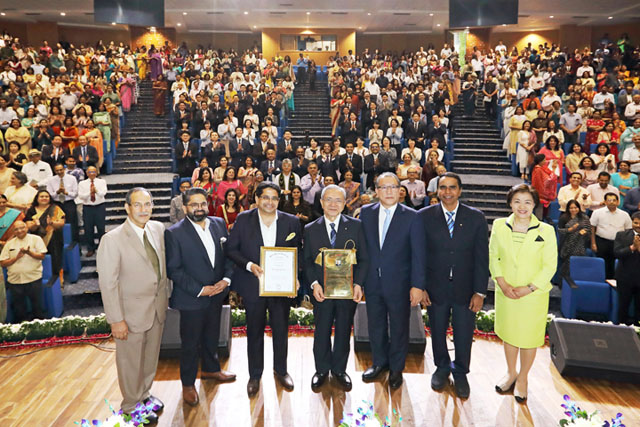 Manav Rachna can be translated as “developing human beings.” The founder of the university, educator and philanthropist Dr. O.P. Bhalla, began developing Manav Rachna Educational Institutions (MREI), including the Manav Rachna College of Engineering, a forerunner of the university, in the north Indian city of Faridabad with the vision of uplifting and revitalizing the local community. Until then, the city had lacked quality higher education institutions.

Chancellor Bhalla remarked on a deep resonance between Mr. Ikeda’s educational philosophy and the aims of his university, which he described as being imbued with the spirit of his late father. “Dr. Ikeda’s mission of peace and sustainability has inspired many an endeavor at Manav Rachna University,” he said. “[Dr. Ikeda] embodies a vision and mission that Manav Rachna humbly stands for. Manav Rachna family extends its heartfelt gratitude to him for being an unmatchable inspiration for its students.”

In an acceptance speech read by Soka Gakkai President Harada, Mr. Ikeda expressed his heartfelt appreciation for the honor and lauded MRU’s commitment to creating better human beings, stating, “MRU’s philosophy is brimming with an affectionate attentiveness to people and their needs, a warm regard for life. I have always considered this kind of passion as the place from which education must depart and to which it must return. The ultimate goal of education is the happiness and growth of each individual. Our humanity can only be honed and polished through interactions with other people. Life can only be refined in contact with other lives.”

[Adapted from an article in the September 26, 2019, issue of the Seikyo Shimbun, Soka Gakkai, Japan]