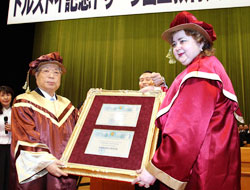 Founded in 1938, TSPU took the name of the Russian literary giant Leo Tolstoy on its 20th anniversary. The teachers training university includes a department established in 1996 dedicated to disseminating the spiritual legacy of Tolstoy and nurturing students' character and spirit based on Tolstoy's humanistic philosophy. TSPU offers comparative courses on Tolstoy and world thinkers including Mahatma Gandhi and Ikeda. Some 6,000 students are enrolled at TSPU, which has consistently been ranked among the top ten teacher training institutions by the Russian Federal Education Agency.

Rector Shaydenko said a factor in the TSPU academic council's unanimous decision to name Mr. Ikeda an honorary professor was that many of the faculty and students have previous exposure to Mr. Ikeda's writings and are aware of the deep resonance between his thinking and that of Tolstoy. Commenting that TSPU has been a member of the International Association of Universities for ten years now, Rector Shaydenko said TSPU has pioneered ethical education and has developed a prototypical pedagogy that reflects universal human values. She remarked that Mr. Ikeda's ideals concur with those of the world's thinkers such as Tolstoy who advocated humanism and nonviolence and she underscored the significance of their collective ideals in a contemporary age wrought with tragedies born of war, terror and ethnic conflicts. Expressing her belief that humanity has finally come to recognize the universal wisdom of past sages and that there is no longer any margin for repeated error, she stated that Mr. Ikeda has greatly contributed to transforming awareness through introducing the concept of human revolution--an inner-directed reformation that leads to positive changes in one's immediate environment and society.

In his congratulatory speech, Mr. Vladimir Tolstoy, grandson of the Russian writer, referenced Mr. Ikeda's essay on Tolstoy and expressed admiration for the depth of the SGI leader's understanding of his forbearer's views on life and philosophy, as well as for the consonance of the two men's ideals.

In an acceptance speech, Mr. Ikeda conveyed his heartfelt appreciation for the honor bestowed upon him from a university deeply connected to Leo Tolstoy, whose works he read avidly during his youth. Sharing many edifying quotes from the great Russian writer, Mr. Ikeda encouraged the first year students present at the ceremony to challenge themselves and work hard to emulate the example of Leo Tolstoy's uncompromising life. He asked them to take good care of their parents and shared his hopes, saying in English: "Each one of you, become a winner of happiness!" "Live with a great mission!" "Become a champion of happiness!"

[Adapted from an article in the April 3, 2008, issue of the Seikyo Shimbun, Soka Gakkai, Japan]