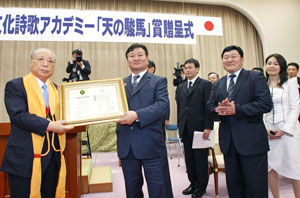 On April 12, 2008, the Mongolian Academy of Culture and Poetry, an organization of Mongolian poets and cultural figures, presented its first Tengeriin Hureg (Celestial Horse) award to Daisaku Ikeda, SGI president, in recognition of his literary and cultural achievements. The academy created the triennial award to honor individuals who have enriched humanity through major contributions to poetry, literature and culture, and have made an impact on Mongolian culture.

In his citation, Dr. Mend-Ooyo said Mr. Ikeda is widely respected in Mongolia, a country that values Buddhist tradition, for his humanitarian ideals and his dedicated efforts to spread and restore Buddhist compassion in the contemporary age. He said that Mr. Ikeda's writings encompassing philosophy, poetry and literature have been widely read and studied by Mongolian intellectuals, and that the SGI's multifaceted initiatives under Mr. Ikeda's leadership to establish peace and human security enjoy broad support.

Describing the symbolism of the Tengeriin Hureg award, Dr. Mend-Ooyo shared a Mongolian folk tale in which a person takes flight towards his dreams and hopes on the back of a winged horse. He then introduced a poem by renowned 20th century Mongolian poet Begziin Yavuukhulan, who sang, "poetry is a fleet-footed horse of infinite strength born of the heart." Horses are highly valued in Mongolia, a traditionally a nomadic culture. Dr. Mend-Ooyo said the national instrument of Mongolia, the morin khuur (horsehead fiddle), which has a carved ornamental horsehead atop its neck and strings made from horse hair, represents the poetic spirit that can soar into the infinite cosmos.

Along with the award certificate, Dr. Mend-Ooyo presented Mr. Ikeda with a morin khuur, his personal calligraphic work and a Mongolian steed. The four-year-old horse with bloodlines dating to the days of Genghis Khan, which Mr. Ikeda named "Wings of Peace," will remain and be cared for in Mongolia.

Mr. Ikeda expressed his deep appreciation to Dr. Mend-Ooyo for the honor from the prestigious Mongolian academy which he heads. Referencing two Mongolian maxims, "One's life was created by one's parents, but one's heart is created by one's mentor," and "The light of a lamp originates from oil; a disciple's wisdom is born of his mentor," Mr. Ikeda shared his belief that one who has a mentor is strong, bright and happy. He commended Dr. Mend-Ooyo, a renowned poet in his own right, for having vindicated his mentor Begziin Yavuukhulan, a 20th century poet who had been unjustly censured and derided, and for realizing his mentor's dream of promulgating Mongolian poetry throughout the world.

Speaking to the youth present, Mr. Ikeda remarked that the world is waiting for pure-hearted youth who uphold peace and justice and are armed with philosophy and passion. He encouraged them to live true to themselves without being caught up with the opinions of others and to courageously and boldly pursue their chosen paths in life.

[Adapted from an article in the April 13, 2008, issue of the Seikyo Shimbun, Soka Gakkai, Japan]