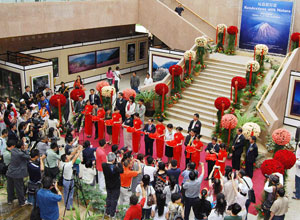 After a message from Mr. Ikeda was read by an SGI representative, Museum Director Xie Mohua, speaking on behalf of the sponsors, expressed his pleasure for the opportunity to host the exhibition. Remarking that Mr. Ikeda's photographs communicate his love for nature and ordinary people, Mr. Xie said the exhibition would serve to foster mutual understanding and build a bridge of friendship and peace. A ribbon-cutting officially launched the exhibition of the 105 photographic works being shown.

Guests commented that the photographs elicit an emotional connection with Mr. Ikeda's love of nature and humanity and his yearnings for peace and friendship.

In March of this year, the Yunnan National Museum named Daisaku Ikeda an honorary advisor in recognition of his extensive efforts to promote creative coexistence between different cultures and for his multi-faceted contributions to Sino-Japanese friendship.

Yunnan is China's most culturally diverse province. Yunnan National Museum, established in 1995, is the largest ethnic museum in China, housing some 40,000 artifacts of 26 minority cultures of China such as clothing, handicrafts, textiles, religious implements, ancient manuscripts, weaponry and musical instruments. More than three million people have visited the museum to date.

[Adapted from an article in the April 27, 2008, issue of the Seikyo Shimbun, Soka Gakkai, Japan]