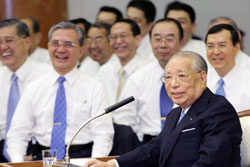 On April 23, 2008, Daisaku Ikeda attended the monthly Soka Gakkai leaders meeting, which commemorated May 3rd, Soka Gakkai Day, at the Tokyo Makiguchi Memorial Hall in Hachioji, Tokyo. SGI members from 17 countries and territories joined Soka Gakkai representatives from throughout Japan at the gathering.

In his speech, Mr. Ikeda announced that Nichiren Buddhism is now practiced in 192 countries and territories around the world, following the recent addition of the Solomon Islands in the South Pacific and Montenegro in Europe to the list of countries where SGI members practice. He praised the efforts of the members throughout the world who are undertaking activities to promote peace, culture and education in their respective communities.

Mr. Ikeda referred to his meeting with British historian Arnold Toynbee 36 years ago as the starting point for his efforts to meet and engage in dialogues with leaders, educators, scholars and activists from all parts of the world in an effort to contribute to humanity's peace and happiness. He indicated that he has met and held dialogue with some 1,600 such individuals and published 50 books of dialogues with individuals including Nobel Peace Laureate Linus Pauling, leading economist J. Kenneth Galbraith, South African leader Nelson Mandela, Nobel Peace Laureate Joseph Rotblat, former Soviet leader Mikhail Gorbachev and former Club of Rome President Aurelio Peccei.

Mr. Ikeda then discussed a passage from Nichiren's writings which states, "I have believed it is most important to understand one's obligations to others, and made it my first duty to repay such debts of kindness," remarking that Buddhist philosophy seeks and elucidates the way to lead the most humane existence.

Recalling the ideas of his mentor second Soka Gakkai President Josei Toda, he stated that social ills are a reflection of the loss of the spirit of appreciation. In government, for example, when leaders forget their debt of gratitude to the common people upon whose support they depend, they become arrogant and more easily fall sway to dissipation and corruption. Similarly, the family declines when its members lose their sense of appreciation toward one another. 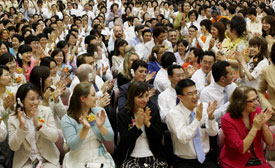 SGI overseas members from 17 countries and territories were in attendance

Sharing other Buddhist scriptures and teachings that discuss the importance of honoring one's obligations and commitments to others, Mr. Ikeda clarified that, among all the various types of human relationships, from the perspective of Buddhism, the relationship between mentor and disciple is most vital to human happiness and development. He stated his life path of dedication to work for people's happiness is an effort to respond to his mentor, Josei Toda, and declared that the global development of the SGI today is a culmination of the SGI members' efforts for the happiness of others based on this correct way of life as human beings.

Mr. Ikeda commented that the SGI's progress is testament to the words of Victor Hugo that "the greatest key to democracy is solidarity." He quoted Hugo further, declaring, "Humans unite with the planets, planets, with the sun, the sun, with the stars, the stars, with the nebula, and the nebula and constellations, with ad infinitum (infinity) . . . The solidarity among people is the inviolable, natural conclusion born of the solidarity of the universe."