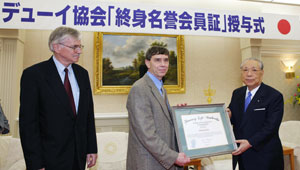 The John Dewey Society, a leading American association of educators dedicated to scholarly and scientific studies of the relationship between school and society, named Soka Schools and University founder Daisaku Ikeda the society's first honorary life member. Mr. Ikeda was recognized "for his tireless efforts for world peace and social justice through the philosophy and practice of value-creating education." The society's board of directors unanimously agreed to the appointment.

Society President Jim Garrison, a professor in the College of Human Resources and Education at Virginia Polytechnic Institute and State University, USA, and Professor Larry A. Hickman, past society president and currently director of the Center for Dewey Studies and professor of philosophy at Southern Illinois University Carbondale, USA, traveled to Japan to present the certificate of honorary life membership to Mr. Ikeda. The ceremony took place at a Soka Gakkai facility in Karuizawa, Nagano Prefecture, on August 12, 2008.

Founded in 1935, the John Dewey Society's mission, as described on its website, is to keep alive John Dewey's (1859-1952) spirit of critical and reflective inquiry into the problems in education and culture. The society also promotes critical study of Dewey's influential ideas about democracy, education and philosophy.

In his conferral speech, Prof. Garrison remarked that Mr. Ikeda's work as a "pioneer of 21st century education" has deep resonance with the work of John Dewey, and his commitment to education for global citizenship "echoes Dewey's lifetime conviction that education is not a preparation for living, but life itself."

Prof. Garrison also referred to August 24, the date of the award, as commemorating Mr. Ikeda's 61st anniversary of joining Soka Gakkai. He described the poignant meeting between Mr. Ikeda and Josei Toda, the educator who would later become Soka Gakkai's second president, and the relationship of mentor and disciple that developed between them.

In closing, Prof. Garrison stated that it was only natural for Mr. Ikeda to be appointed the first-ever life member of the John Dewey Society, "since in many ways, his life has always honored the beliefs and values the Society and its members hold in highest esteem."

Expressing his deep appreciation for the honor, Mr. Ikeda remarked that both Mr. Toda, his mentor, and Tsunesaburo Makiguchi, educator and first Soka Gakkai president, held Dewey in the highest esteem. Referring to Makiguchi's citation of Dewey in his own work, he stated that Soka pedagogy would not have come into existence without the pedagogy of Dr. Dewey.

Referring to a statement by Dewey about untapped human resources, Mr. Ikeda declared that the "inner microcosm" of life could be defined as the "'New Frontier' that humanity of the 21st century should challenge to develop with courage," and said that education is the "sacred enterprise" that must undertake this development.

In closing, Mr. Ikeda stated his hope to continue engaging in dialogue with Professors Garrison and Hickman, whom he considers true successors of Dewey, and expressed his resolve to blaze open a path of hope for humanity through humanistic education.

Prior to the conferral ceremony, Mr. Ikeda met and exchanged views on the future of education with Professors Garrison and Hickman.

[Adapted from an article in the August 13, 2008, issue of the Seikyo Shimbun, Soka Gakkai, Japan]