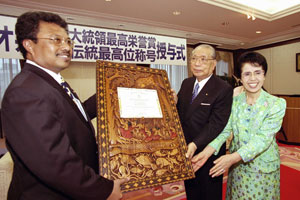 President Tommy E. Remengesau Jr. of the Republic of Palau recently sent a proclamation announcing the appointment of Daisaku Ikeda and his wife Kaneko as Honorary National Citizens of Palau on August 24, 2008. The couple is being recognized for their longstanding commitment to peace through the promotion of education and culture worldwide.

Among the reasons given for the accolade, the proclamation refers to Mr. Ikeda's dedication to the promotion of the dignity and fundamental rights of all people, as well as "his absolute conviction in the immense potential of each person that has inspired [others] to renew their own efforts to create a culture of peace," and Mr. and Mrs. Ikeda's example as global leaders in the effort to create a culture of peace and nonviolence around the world.

Palau, an archipelago in the Pacific Ocean with a wealth of exotic marine life, including beautiful coral reefs, was ruled in turn by various countries from the late 1800s to the mid-1900s. During the Pacific War, Peleliu, one of Palau's islands, was the scene of an intense two-month battle between Japanese and American forces. After three decades as part of the UN Trust Territory of the Pacific under U.S. administration, Palau gained her independence in October 1994. The struggles of this small island nation have strengthened a strong national ethic of peace and creative coexistence.

[Adapted from an article in the August 14, 2008, issue of the Seikyo Shimbun, Soka Gakkai, Japan]