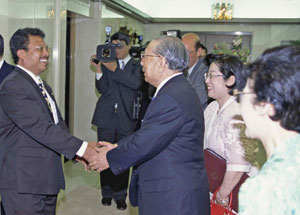 On August 23, 2008, Daisaku Ikeda, SGI president, and his wife Kaneko Ikeda were appointed Honorary National Citizens of the island nation of Palau at a ceremony held in Gold Coast, Queensland, Australia, during an SGI-Oceania conference. The couple was honored in absentia for their longstanding commitment to peace through the promotion of education and culture worldwide.

Risong Tarkong, special assistant to Palau President Tommy Remengesau Jr., presented the proclamation letter, signed by the president, to SGI General Director Yoshitaka Oba, who accepted it on behalf of Mr. and Mrs. Ikeda. In attendance were 370 SGI representatives from 14 Oceanic countries, including Australia, New Zealand, Palau, the Solomon Islands and Micronesia, as well as visiting members from Japan.

The proclamation described the couple as leaders in the effort to create a global culture of peace and non-violence through their dedication to the promotion of the dignity and fundamental rights of all people. It also described Mr. Ikeda's "absolute conviction in the immense potential of each person that has inspired [others] to renew their own efforts to create a culture of peace."

Ms. Tarkong read a message from President Remengesau expressing his appreciation to Mr. and Mrs. Ikeda for their contributions to peacebuilding through cultural and educational exchanges and welcoming them as new members of the Palau and Oceania communities.

[Adapted from an article in the August 29, 2008, issue of the Seikyo Shimbun, Soka Gakkai, Japan]