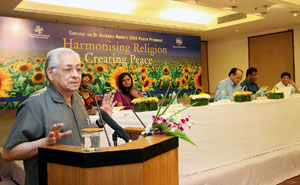 On August 25, 2008, the Indira Gandhi National Centre for the Arts (IGNCA) and Bharat Soka Gakkai (BSG) cohosted a symposium titled "Harmonizing Religion, Creating Peace" based on Daisaku Ikeda's 2008 peace proposal of the same title. Over 400 scholars and guests participated in the event.

A common theme among the speakers was the relationship between the inner lives of people and prevailing social conditions. Symposium Chair and former Attorney General for India Soli J. Sorabjee noted that 60 years after the adoption of the Universal Declaration of Human Rights, India still has a long way to go toward fulfilling the Declaration's vision. He spoke of a need for greater individual tolerance and self-discipline as an antidote to social conflict.

The keynote address was delivered by Dr. V. N. Rajshekharan Pillai, vice chancellor of Indira Gandhi National Open University (IGNOU), who highlighted the link between deprivation and violence and expressed his belief that value-based and contextual education can be the key to peace. He described a need "to review the content of education in relation to our understanding of the context of society" and stressed the necessity of prioritizing literacy training and providing universal access to education.

In her commentary, social activist and police officer Dr. Kiran Bedi, 1994 winner of the Ramon Magsaysay Award, regarded as Asia's Nobel Prize, related her experience of teaching Vipassana meditation techniques--a way of self-transformation through self-observation--to police officers and inmates of the Tihar Jail, one of the largest prison complexes in the world, beginning 15 years ago. Referencing Mr. Ikeda's proposal, she concurred that it is necessary to break the cycle of intergenerational poverty in developing countries through more human-centered policies.

In the closing address, Dr. K. K. Chakravarty, IGNCA member-secretary, related the work being done by IGNCA and BSG and emphasized the importance of dialogue for bringing about change. In her closing remarks, BSG Director-General Naveena Reddi reiterated the message of the seminar, that respect for all people forms the bedrock of humanism and that ideology and cultural difference should be treated as flexible, fluid concepts that are constantly renegotiated so as to best serve human needs: people and not abstract principles are primary.

[Adapted from an article in the September 18, 2008, issue of the Seikyo Shimbun, Soka Gakkai, Japan and a report from Bharat (India) Soka Gakkai (BSG); photos courtesy of BSG]