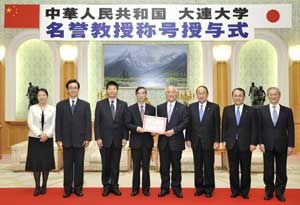 On December 3, 2008, Dalian University, located in Dalian, Liaoning Province, China, conferred an honorary professorship upon Daisaku Ikeda, Soka University founder and SGI president, for his contributions to global peace and initiatives that have fostered friendly relations between China and Japan, as well as for his broad scholarship.

In his citation, Dr. Pan expressed his pleasure in presenting Mr. Ikeda, who has greatly contributed to Sino-Japanese friendship and global peace, with Dalian University's honorary professorship in 2008, which marks the 40th anniversary of Mr. Ikeda's proposal for the normalization of Sino-Japanese diplomatic relations. He also commended Soka University for fostering individuals of lofty character who endeavor to lead value-creative lives.To celebrate the occasion, Dr. Zhao and Mr. Ikeda exchanged poems composed in Chinese.

In an acceptance speech, Mr. Ikeda expressed his profound appreciation for the honor, noting that Dalian, which had a special place in Premier Zhou Enlai's heart, was where the premier made his famous statement: "Human beings cannot be classed into 'higher or lower' social rank or status. We are all servants of the people." Mr. Ikeda commended Dalian University for remaining true to this spirit by encouraging the personal development of each student and instilling in them a spirit of mutual support, cooperation and appreciation, and inspiring them to become capable global citizens contributing to humanity's well-being.

[Adapted from an article in the December 4, 2008, issue of the Seikyo Shimbun, Soka Gakkai, Japan]