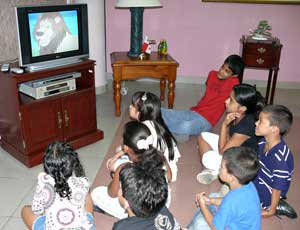 From September 5 through the beginning of December, 2008, SERTV Channel 11, a public radio and television station in Panama, aired an animated series in Spanish based on original children's stories by Daisaku Ikeda. Fourteen stories, originally produced in Japanese by Shinano Art & Culture Consultant in Japan, were aired throughout Panama on Friday afternoons and Saturday mornings.

Channel 11 General Manager Carlos Aguilar said he and the station managers had been impressed by the quality of the films as well as the positive messages they convey. "The contribution that SGI-Panama has made to our station's children's programming is significant. The fourteen stories provide good entertainment as well as contributing to the children's development as good citizens." He said he appreciated Mr. Ikeda's making the animations accessible without a thought to profit.

SGI-Panama General Director Gabriel Martínez Garcés commented that the stories, which convey values such as friendship, courage and love, "offer our country's children something different than what they are used to watching on commercial channels--which is violence and more violence."

The The Princess of the Desert Kingdom, the first of the series, drew favorable comments from both children and adults.

"We have to protect our environment--this is a clear message for children and adults. The story teaches us to love and respect one another, as well as animals and the environment. The eternal paradise and oasis is found in our hearts. It is not only youth who will discover this truth--everyone can do so since there is a child in each of us," remarked Prof. Néstor J. Castillo Restrepo, chair of the Culture Department at University of Panama.

Yadira de Pérez, a teacher, commented, "The story is well articulated. It is clear, realistic and amusing. I liked it very much because it conveys, in language children can relate to, values like friendship and peace, and the importance of protecting nature. It's creative . . . I'd recommended watching these educational stories to my students."

"I learned about taking care of water (resources) and being friendly with others. We shouldn't waste any water because there are people who have nothing to drink," said nine-year-old Gloria Chu.

Selected films from the series were previously broadcast on the National Geographic Channel in English and Hindi in India, Nepal, Bhutan, Bangladesh, Pakistan, Sri Lanka and the Maldives. In early 2008, the national Sri Lankan TV station aired the animations in Sinhalese. Asian TV (ATV) in Hong Kong aired 12 animations in Cantonese between June and July, 2008.

[Adapted from an article in the October 17, 2008, issue of the Seikyo Shimbun, Soka Gakkai, Japan, and a report from SGI-Panama; photo courtesy of SGI-Panama]