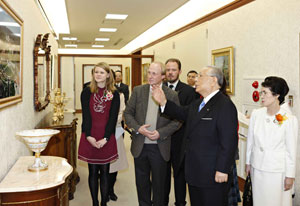 Happiness is born of spiritual fulfillment. And this is found in a life dedicated to helping others to become happy, and in developing the strength to confront and overcome all adversity. It grows also from a sense of appreciation for others. These were the core themes introduced in the address by Daisaku Ikeda, SGI president, at the December 13, 2008, monthly Soka Gakkai leaders meeting in Tokyo.

The event was held in conjunction with the Soka Gakkai's nationwide youth leaders meeting. SGI members from 16 countries and territories attended. Also present were Vladimir I. Tolstoy, great-great-grandson of the Russian writer Leo Tolstoy (1828-1910) and director of the Tolstoy museum-estate, his daughter Anastasia Tolstaya, and Alexander Sholokhov, grandson of the Russian Nobel literature laureate Mikhail Sholokhov (1905-84) and director of the State M. Sholokhov Museum-Reserve. Mr. Tolstoy and Mr. Sholokhov presented Mr. Ikeda with, respectively, the Time of Tolstoy Award and a medal commemorating the 100th anniversary of the birth of Mikhail Sholokhov. [Read article]

After thanking and welcoming the Russian guests, Mr. Ikeda opened his remarks by citing a passage from Leo Tolstoy's writings describing the heartening effect of a mother's smile. Similarly, it is the women of the SGI, Mr. Ikeda said, who are the backbone of the organization, whose bright spirits and persistent grassroots efforts have most powerfully advanced the SGI's movement. He stated that the path of the SGI's progress and development lies in always according women, young and old, the highest esteem and appreciation.

Mr. Ikeda told the audience that individuals' efforts to treasure their mothers are "the very foundation of humanity," and that a sense of appreciation towards one's parents is the basis for the development of character and integrity. "No matter what seeming greatness people may achieve, if they don't value and respect their parents who have done so much for them, it will be nothing more than an illusion." In contrast, the spirit to cherish one's parents "will become a limitless source of strength for developing yourself and becoming a stronger and bigger person."

Throughout his remarks, Mr. Ikeda quoted from the writings of Tolstoy and Sholokhov, drawing parallels to the teachings of Buddhism. "The writings of both Tolstoy and Sholokhov show the way to inner happiness," he remarked. Tolstoy's conviction that "one who knows how to endure hardship will never be unhappy," for instance, reflects a core attitude in the SGI's philosophy. Mr. Ikeda urged the audience to: "courageously take on difficulties. Rise to the challenge of life's trials and tribulations. You can't develop genuine character and ability by sidestepping adversity and struggle." He went on to say that, from the perspective of Buddhism, our opponents can be regarded as our greatest allies, as they force us to develop fortitude and strength of character.

Tolstoy himself embodied such strength, refusing to be defeated by political and religious oppression and malicious social slander. "Life is a struggle, and it is through this very struggle that we build an unshakable self," Mr. Ikeda affirmed.

Praising the fortitude and generosity of the members who volunteer to deliver the Seikyo Shimbun, the organization's paper, many of whom begin their routes in the pre-dawn hours, Mr. Ikeda said, "Those whose final years of life are victorious are the real winners. Often the triumphs gained in youth can be all too fleeting and transitory. Unsurpassed happiness belongs to those who have overcome every difficulty, savor a genuine sense of fulfillment, and can say, 'Yes, I lived a good life.'"

Describing his youthful fondness for the writings of Tolstoy and Sholokhov, Mr. Ikeda asked, "What was the cherished wish of these two great authors? The happiness of all humanity. They longed for and looked forward to a time when a spring of peace and human rights would come to the world." This aspiration has much in common with that of Buddhism, he said, asking fellow SGI members to join together to realize the advent of such an age.

The SGI leader also quoted a passage from a letter sent to Tolstoy by a young Nikolai Gusev, an ardent student of Tolstoy's writings who had served as the author's secretary for two years and was later exiled from Russia. Gusev wrote, "Even if troubles a thousand times as severe were to rain down upon me, I would still thank the heavens that I was able to spend two whole years at your side . . . Being with you was always my greatest happiness." The path of mentor and disciple, Mr. Ikeda affirmed, is a source of great happiness and makes for a life of genuine value. He described his years together with his own mentor, Josei Toda, as a magnificent drama and asked the youth members present to create similar histories of energetic struggle.

Closing his speech, Mr. Ikeda again thanked the guests from Russia and expressed his gratitude to the SGI members for all their efforts over the past year.