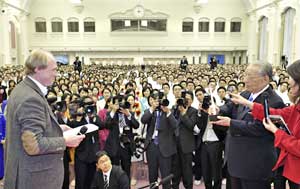 Mr.Tolstoy presents the Time of Tolstoy certificate to Mr. Ikeda

On December 13, 2008, the Museum-Estate of Leo Tolstoy "Yasnaya Polyana," a state memorial and natural preserve, and the International Foundation "Heritage of Leo Tolstoy," presented the Time of Tolstoy award to Daisaku Ikeda, SGI president. Mr. Ikeda is the first recipient of this award, created earlier this year to commemorate the 180th anniversary of Leo Tolstoy's (1828-1910) birth and to honor individuals deemed to have contributed to the promulgation of Tolstoy's spirit. Vladimir I. Tolstoy, director of Yasnaya Polyana and the great-great-grandson of the Russian literary giant, presented the award to Mr. Ikeda following the Soka Gakkai's December monthly leaders meeting at the Tokyo Makiguchi Memorial Hall in Hachioji, Tokyo.

In his citation, Mr. Tolstoy explained that although Leo Tolstoy gained world renown as the author of epic novels such as War and Peace, Anna Karenina and Resurrection, not many are aware of his philosophy, his religious views and the spiritual cry that emanated from his being in his later years. Tolstoy had voiced a warning about the irrevocable errors in judgment that would lead society, the country and the masses astray toward cataclysmic warfare, and ultimately the spiritual and physical ruination of the people themselves. Unfortunately few listened, Mr. Tolstoy remarked, and the world has traveled a path far removed from the ideals upheld by the great Russian writer. Referring to the crises humanity now faces, Mr. Tolstoy said the "Time of Tolstoy" envisages an age of fellowship, mutual respect and tolerance among humanity, transcending differences of race, religion or politics. He pointed to Mr. Ikeda as exemplifying an individual of fortitude who has dedicated himself to the creation of such an age through a thorough commitment to Tolstoy's humanistic ideals, and that it is for this reason he was chosen as the first recipient of the newly-created award.

At the same occasion, Mr. Ikeda received a medal commemorating the birth centennial of Mikhail A. Sholokhov (1905-1984), a Nobel Laureate in literature, from the M. A. Sholokhov State Museum and Reserve. Alexander Sholokhov, museum director and grandson of the Russian writer, presented the medal to Mr. Ikeda.

In presenting the award, Mr. Sholokhov referred to M. A. Sholokhov's meeting with Mr. Ikeda in 1974 in Moscow, during which they engaged in an intense discussion on the meaning of life. Mr. Sholokhov stated that the centennial medal was being presented to Mr. Ikeda in recognition of his significant contributions to the development of humanism that his grandfather had advocated.

Ten centennial M. A. Sholokhov medals have been presented to individuals in Russia, including Prime Minister Vladimir Putin, who was the initial recipient for his efforts to preserve Sholokhov's literary works. Mr. Ikeda is the first non-Russian recipient of the medal.

Mr. Sholokhov presents Mr. Ikeda with a photograph of Mikhail A. Sholokhov taken in 1974

In his acceptance speech, Mr. Ikeda warmly welcomed the Russian guests--Mr. Tolstoy, his daughter Anastasia Tolstaya and Mr. Sholokhov--and expressed his deepest appreciation for the prestigious accolades he had received. Referring to Tolstoy's novel War and Peace, Mr. Ikeda commented that among the many themes running through the novel was the figure of a youth who overcame and transcended life's ordeals. He encouraged the young people in the audience to face adversities head-on, not fearing arduous work or hardship. Everything in life will become nourishment and "training" for their growth, he told them, including "powerful enemies," as elucidated in Buddhism, who may actually serve as one's greatest ally and "good friend" by helping one to strongly forge strength of purpose and mettle. He also introduced an excerpt from one of Sholokhov's novels, encouraging youth to always win with the courage and tenacity of a lion king or great eagle.

[Adapted from articles in the December 14 and 16, 2008, issues of the Seikyo Shimbun, Soka Gakkai, Japan]