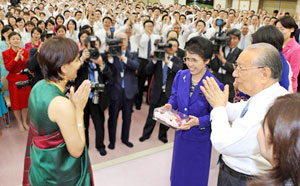 Mr. and Mrs. Ikeda present a corsage to an SGI member from India attending the meeting. (February 6, 2008)

On February 6, 2008, SGI President Daisaku Ikeda attended the Soka Gakkai's monthly leaders meeting in Tokyo, where he addressed representatives of the lay Buddhist association, including Soka Gakkai International representative members from some 20 countries.

In his speech, Mr. Ikeda discussed the qualities of good leadership and talked about the importance of women's contributions in shaping society.

Referring to the words of former U.S. President John F. Kennedy that courage is the most noble of human attributes, he asserted it is in courageous action that compassion--so highly valued in Buddhism--becomes manifest.

Mr. Ikeda examined the characteristics of Zhuge Liang (also known as Chuko K'ung-ming) the celebrated statesman and strategist of Chinese history and a hero of the epic Chinese historical novel The Romance of the Three Kingdoms. Referring to the example of Zhuge Liang, Mr. Ikeda enumerated attributes crucial to leaders, such as eschewing extravagance, refraining from pompous and self-centered behavior, remembering to repay one's debts of gratitude, taking delight in the growth of one's juniors, having the ability to listen others' opinions and valuing discussion and unity.

He also spoke on the significance of the discussion meeting, a basic activity and tradition of Soka Gakkai since its inception. It has been through such informal and open small-group discussions that understanding of Nichiren Buddhism has spread, he said, expressing the high value he places on the development of such grassroots dialogue.