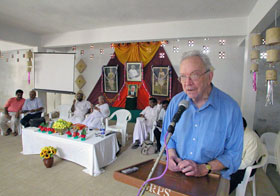 Dr. Hunter speaks at the symposium at the G. Ramachandran (G.R.) Public School in southern India

On February 17, 2008, G. Ramachandran (G.R.) Public School in Thiruvananthapuram, Kerala, southern India, hosted a symposium titled "A Teacher of Value-Creation" on the education philosophy of Soka Schools founder and SGI president Daisaku Ikeda. A panel of educators, including Howard E. Hunter, professor emeritus from the Department of Comparative Religion at Tufts University, USA, and two teachers from the G.R. Public School discussed Soka education, the student-centered, value-creating education philosophy advocated by Mr. Ikeda, in the context of educational values espoused by Mahatma Gandhi.

Dr. Hunter commented that Mr. Ikeda has dedicated his life to empowering people with hope and courage, making his own life an example to others. He has promoted a philosophy of humanism based on a search for universal values, fostering respect for cultural diversity. Dr. Radhakrishnan spoke highly of Mr. Ikeda's contributions to education and peace and his wide promotion of ideals consonant with those of Gandhi and Dr. Ramachandran, a Gandhian disciple and educator who worked for the welfare and empowerment of India's lower castes.

[Adapted from an article in the March 8, 2008, issue of the Seikyo Shimbun, Soka Gakkai, Japan]