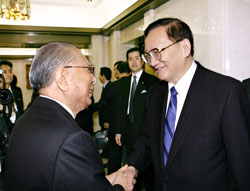 On February 22, 2008, State Councilor Tang Jiaxuan of the People's Republic of China and his party were welcomed by Daisaku Ikeda, SGI president, and Soka Gakkai youth at the Seikyo Press building in Shinanomachi, Tokyo. The two first met in 1974 on Mr. Ikeda's first trip to China, when a young Mr. Tang served as interpreter during Mr. Ikeda's meeting with then Finance Minister Li Xiannian (1909-1992), who later became China's third president. This was their tenth meeting.

Mr. Tang and Mr. Ikeda exchanged views on the significance of the Japan-China Peace and Friendship Treaty signed 30 years ago and the importance of seeking creative ways for strengthening Sino-Japanese bilateral relations and cultivating friendship between the two countries. Referring to Chinese President Hu Jintao's upcoming state visit to Japan in April, Mr. Ikeda expressed his hopes for the success of the trip, likening it to a warm spring breeze that beckons flowers to burst into full bloom.

Mr. Tang, who has set great store on Sino-Japanese relations, said Zhou Enlai had highly regarded Mr. Ikeda's early proposal (in 1968) for the normalization of bilateral relations between Japan and China, and that Zhou Enlai's meeting with Mr. Ikeda will have a significant place in history. Mr. Tang was in Japan as guest of the Minister for Foreign Affairs and met with Prime Minister Yasuo Fukuda to discuss recent issues affecting Sino-Japanese relations.

[Adapted from an article in the February 23, 2008, issue of the Seikyo Shimbun, Soka Gakkai, Japan]