Collection of Daisaku Ikeda's Essays to be Published in Japan 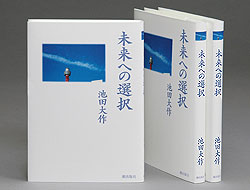 Mirai e no sentaku, a collection of essays published 2003-2006 in the Kanagawa Shimbun daily

Ushio Publishers will release Mirai e no sentaku (Choices for the Future), a collection of 25 essays in Japanese by Daisaku Ikeda published monthly in the Kanagawa Shimbun daily from February 2003 to May 2006. The book is divided into three sections: "Path of Wisdom in the 21st Century" addresses themes of nonviolence, dialogue among civilizations, women's empowerment and an aging society. "Encounters with Historic Figures" contains commentaries on famous figures such as the eminent Chinese writer Lu Xun, French military general and Emperor Napoleon Bonaparte and the brilliant music composer Ludwig van Beethoven. In "Dialogues with the Contemporary World," Mr. Ikeda reflects on his meetings with individuals such as former Soviet President Mikhail Gorbachev, U.S. civil rights leader Rosa Parks and former South African President Nelson Mandela, who each made tough choices and, with indomitable conviction, transformed the current of history.

Commenting on the book's title in the preface, Mr. Ikeda remarks that both "hopes" and "ideals" are contained in the word "future." He affirms people are able to cultivate their lives, transform the era and create a new future by making wise and courageous choices in life.

The book will be available in Japan beginning February 25, 2008.

[Adapted from an article in the February 24, 2008, issue of the Seikyo Shimbun, Soka Gakkai, Japan]