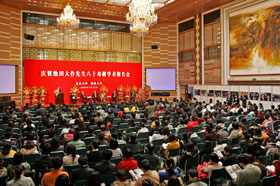 In a message read at the event, the SGI leader paid tribute to the friendships that blossomed from his initial exchanges with the Chinese university, which he visited seven times and where he lectured on three occasions.

Presenters at the symposium were Liu Deyou, managing vice chair of the Chinese Association for Cultural Exchanges with Foreign Countries; Director Jia Huixuan of the Daisaku Ikeda Research Center at Peking University; and Ji Yaguang, vice director of the Center for the Study of Cultural Thought at Nankai University. They offered academic perspectives on Mr. Ikeda's 1968 proposal calling for the normalization of Sino-Japanese diplomatic relations, his thought and achievements and his educational philosophy.

Professor Liu, who had been a Tokyo correspondent for the Xinhua News Agency in 1968, said that at that time for Mr. Ikeda to propose normalization was a bold and courageous move taken at the risk of his life, given the general hostility toward China in Japan, which had festered since Japan's invasion of China in the 1930s. He lauded Mr. Ikeda for his keen insight, which led to the joint declaration by the Komei Party in Japan and the China-Japan Friendship Association that became the foundation for the China-Japan Peace and Friendship Treaty signed in 1978.

Professor Ji summarized Mr. Ikeda's educational philosophy as: cultivating sound character; nurturing humaneness and virtue; instituting a collaborative pedagogy that integrates school, family and society; fostering lifelong learning; developing a global perspective; and cultivating a sense of responsibility for peace and the protection of human dignity. He stated that Mr. Ikeda's philosophy posits as a fundamental goal respect for the absolute sanctity and value of life, and that it supports the realization of humanity's happiness and social harmony by establishing the link between the individual and global society. As such, it provides a realistic guide toward the development of peace in the world.

A Peking University representative commented that for a leading Chinese university to celebrate the 80th birthday of a private Japanese citizen on such a grand scale, with the attendance of officials from so many universities, is unprecedented and reflects the respect and trust Mr. Ikeda has received from the Chinese people.

[Adapted from articles in the February 29 and March 4, 2008, issues of the Seikyo Shimbun, Soka Gakkai, Japan]