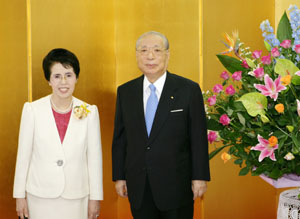 January 2, 2008, marked the 80th birthday of Daisaku Ikeda. This month also marks the 33rd anniversary of the founding of the Soka Gakkai International lay Buddhist organization of which he is president. The SGI was launched on January 26, 1975, on the island of Guam, with participants from 51 countries. Today it is a global network with members practicing Nichiren Buddhism and contributing to society in 190 countries and territories throughout the world.

In a New Year's message, Mr. Ikeda thanked SGI members for their dedicated efforts that have led to the flourishing of the association around the world. Noting that this year marks the 50th anniversary of the death of his mentor, second Soka Gakkai President Josei Toda, Mr. Ikeda stated that Mr. Toda "had devoted himself to a momentous struggle for peace, motivated by a deep wish for the happiness of all humankind." Before his death, Mr. Toda had bequeathed this mission to the young Mr. Ikeda, who traveled beyond Japan after his appointment as Soka Gakkai's third president to fulfill his mentor's aspiration. Encouraging SGI members to advance with the spirit of always moving forward from this moment on, Mr. Ikeda concluded his message with his sincere wishes for their good health, vitality and good fortune, and for the peace, security and prosperity of their respective communities.