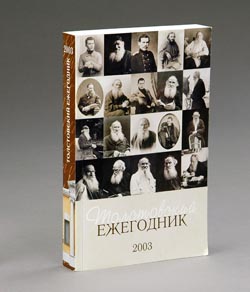 At the request of L.N.Tolstoy State Museum Director Vitaly B. Remizov, a Russian translation of Daisaku Ikeda's discourse on Russian writer Leo N. Tolstoy (1828-1910) was included in the museum's Tolstoy Yearbook published in 2007, which commemorated the literary giant's 175th birth anniversary. The discourse was originally published in five installments in the Seikyo Shimbun newspaper in December 2002.

Founded in 1911, one year after Tolstoy's death, L.N. Tolstoy State Museum is one of Russia's oldest literary museums. Following the 1917 Socialist Revolution, it was established as a state museum in 1920. By decree of the government it became a center for the preservation of the writer's mementos including handwritten manuscripts, photographs and letters, as well as books by and about Tolstoy. The Museum-Estate of Leo Tolstoy ("Yasnaya Polyana"), a state memorial and natural preserve, is also under the charge of the L.N. Tolstoy State Museum.

[Adapted from an article in the January 17, 2008, issue of the Seikyo Shimbun, Soka Gakkai, Japan]