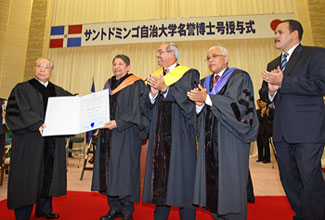 On January 19, 2008, the Universidad Autónoma de Santo Domingo (UASD) of the Dominican Republic conferred an honorary doctorate degree upon SGI President Daisaku Ikeda in recognition of his contributions to promoting a culture of peace and for developing humanistic, student-centered education. The ceremony was held at the Tokyo Makiguchi Memorial Hall in Hachioji, Tokyo.

Professor Díaz explained that the university board of trustees and the university senate unanimously agreed to confer the honorary doctorate upon Mr. Ikeda for his longstanding social contributions grounded in a lofty vision of the betterment of humanity. He stated that Mr. Ikeda has continued to take action to restore positive values that inspire beauty and greatness in human beings.

Rector Reyna delivered a congratulatory address saying his university was honored to present the accolade to Mr. Ikeda, who has established academic institutions throughout the world based on the philosophy of education for the sake of students' happiness. He lauded Mr. Ikeda for his efforts to encourage the development of youth who can creatively and positively transform their environment. Rector Reyna concurred with Mr. Ikeda's belief that human education begins by appreciating the inestimable worth and boundless potential of each individual. He also said Mr. Ikeda was being recognized for underscoring the social responsibilities of institutions of higher education and for his belief that the triumph of education reflects as a triumph of the human being.

Mr. Ikeda expressed his profound gratitude to the UASD delegation for traveling the long distance to present the honorary doctorate and said he shared the honor with the SGI-Dominican Republic men and women in the audience, who have prevailed over adversities and continue to contribute to their society. Quoting from the work of Salomé Ureña de Henriquez (1850-97), a revered poet and founder of the first institution of higher learning for women in the Dominican Republic, Mr. Ikeda called on the young people in the audience to take up her call to battle injustice bred of ignorance and arrogance with courage, perseverance and unity.

[Adapted from an article in the January 20, 2008, issue of the Seikyo Shimbun, Soka Gakkai, Japan]