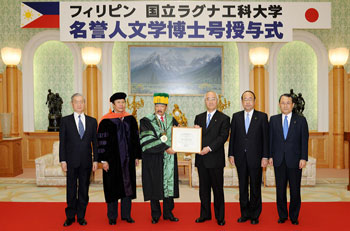 A two-member delegation from Laguna State Polytechnic University in Laguna Province (LSPU), the Republic of Philippines, recently traveled to Japan to present Daisaku Ikeda with the institution's degree of Doctor of Philosophy in Humanities (honoris causa). At a ceremony held at the Soka University campus on January 26, 2008, LSPU President Ricardo A. Wagan entrusted the certificate and a plaque lauding Mr. Ikeda's contributions to world peace Mr. Ikeda "Advocate of World Peace" to Soka University (SU) President Hideo Yamamoto, who accepted it on behalf of the Soka University founder. In his conferral speech, Professor Wagan praised Mr. Ikeda for his humanistic contributions--including the promotion of cultural exchange and education--based on firm optimism and a sense of responsibility for all of humankind. Professor Wagan also concurred with Mr. Ikeda's belief that together with social and structural reforms, each person's efforts at a positive inner transformation are crucial to lasting peace and human happiness.

In a message, Mr. Ikeda expressed his appreciation for the honor. Quoting Philippine independence hero José Rizal, who said, "Without education and liberty, that soil and that sun of mankind, no reform is possible, no measure can give the result desired," Mr. Ikeda extolled LSPU as an educational institute reflecting Rizal's spiritual legacy--the eternal flame of scholarship--that lights the path toward humanity's future.

LSPU President Wagan was accompanied by Commissioner Saturnino M. Ocampo Jr., Republic of the Philippines Commission on Higher Education of the Office of the President.

[Adapted from an article in the January 27, 2008, issue of the Seikyo Shimbun, Soka Gakkai, Japan]