The Japan Times, one of Japan's largest English language dailies, carried an article by Daisaku Ikeda titled "Say No to Nukes in the Arctic" in its January 31, 2008 issue. The article summarizes one of the key points from Mr. Ikeda's 2008 Peace Proposal "Humanizing Religion, Creating Peace" presented on January 26, 2008 in commemoration of SGI's 33rd anniversary. 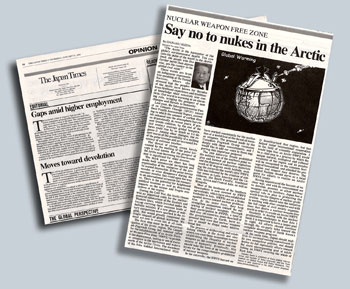 In the article, Mr. Ikeda calls attention to the threat of global warming that could lead to the melting of the polar ice cap in the Arctic seas, which would not only present an environmental hazard but could lead to an international scramble for the resources of the Arctic seabed. Mr. Ikeda warns of the "potential for heightened political tensions as well as disastrous impacts on the unique and fragile ecosystem of the region." He also urges enactment of the Arctic Nuclear-Weapon-Free Zone (NWFZ) proposed by the Canadian Pugwash Group in summer 2007 to circumvent military competition in the region, which, he states, "would greatly compound the tragic impact of global warming." He suggests that Japan, which has "experienced the horrors of nuclear war," should take initiative to protect the world from nuclear proliferation and work toward the realization of an Arctic NWFZ. Mr. Ikeda also calls for the UN to play a major role in realizing an Arctic NWFZ treaty.

[Adapted from an article in the February 1, 2008, issue of the Seikyo Shimbun, Soka Gakkai, Japan]