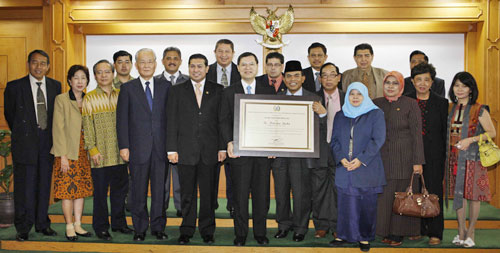 On July 14, 2008, the Jakarta provincial government presented the title of Honorary Distinguished Guest to Daisaku Ikeda, received in proxy by his son Hiromasa. A conferral ceremony took place at the parliament building with the attendance of H.M. Ade Surpriatna, chair and speaker of Jakarta's council, and representatives of seven parliamentary groups and a number of provincial councils.

In his conferral speech, Dr. Ade described Mr. Ikeda's broad-based efforts to foster exchanges transcending differences in religion and culture and said it was a singular honor for Jakarta to recognize Mr. Ikeda as an "emissary of peace" for his longstanding dedication to pacifism. He expressed his hopes for the SGI's future development, commending SGI and SGI-Indonesia for their social contributions.

Dr. Ade presented a certificate and shield to Hiromasa Ikeda, who was in Indonesia to attend the 50th anniversary celebrations of the establishment of diplomatic relations between Indonesia and Japan on his father's behalf. In a message of appreciation read by his son, Mr. Ikeda thanked the Jakarta special province for the award, saying it was an honor which he shared with all the members of SGI-Indonesia. Describing his expectations of young people, Mr. Ikeda recalled the events of October 28, 1928, when Indonesian youth from different ethnic groups convened a congress in Batavia--present day Jakarta--and pledged their commitment to "One Homeland, One Nation." This action, celebrated today as Youth Pledge Day, brought Indonesia's diverse cultures together in solidarity and sparked the Indonesian independence movement. Mr. Ikeda remarked that Jakarta is a bourgeoning city brimming with the indomitable spirit of youth. When youth arise with a firm philosophy and contribute to the welfare of their society, he said, society will progress and prosper; Jakarta's future is therefore infinitely bright.

On the previous day, SGI-Indonesia had collaborated with the Indonesian National Youth Committee (KNPI) and the Indonesian Muslim Artists and Culturalists Institute (Lesbumi) on a musical extravaganza to celebrate the 50th anniversary of the establishment of diplomatic relations between Indonesia and Japan. SGI-Indonesia representatives from Sumatra, Bali, Sulawesi, Kalimantan and other Indonesian islands participated in the event.

[Adapted from an article in the July 24, 2008, issue of the Seikyo Shimbun, Soka Gakkai, Japan]