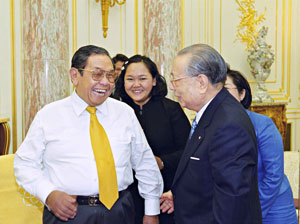 Former Indonesian president Abdhurrahman Wahid (left) and Mr. Ikeda during their meeting in Tokyo in April 2002

On July 14, 2008, The Wahid Institute, founded by former Indonesian president Abdurrahman Wahid to promote pluralism in Indonesia, honored Daisaku Ikeda for his contributions to building international peace through education and culture with a "resolute commitment toward multicultural understanding and interreligious tolerance." The ceremony took place at The Wahid Institute in Jakarta, Indonesia, attended by Mr. Wahid, his wife Shinta Nuriyah, his daughter Yenny Wahid, who is the institute's director, and an SGI contingent headed by the honoree's son, SGI Vice President Hiromasa Ikeda, who was in Indonesia on his father's behalf to attend the 50th anniversary celebrations of the establishment of diplomatic relations between Indonesia and Japan.

Mr. Wahid founded The Wahid Institute in 2004 to further develop moderate Islamic thought for promoting democratic reforms, religious pluralism, multiculturalism and tolerance among Muslims in Indonesia and around the world. The institute also fosters dialogue among Islamic, Christian, Judaic, Hindi and Buddhist traditions. 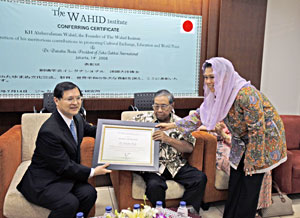 Director Wahid spoke of Mr. Ikeda's efforts to build a solid network of peace through dialogues on civilizational issues with world leaders and through his prolific writings, calling him a role model for activists. She expressed her hopes for her institute to work together with Mr. Ikeda to find solutions to various social ills.

Mr. Wahid reiterated the importance of sincere, open dialogue for paving the way toward a new era. Hiromasa Ikeda, who accepted the award on his father's behalf, expressed his deep appreciation and gratitude to The Wahid Institute for the prestigious honor. He stated that through their friendship, his father, a Buddhist, and Mr. Wahid, a Muslim, have given support to a path of interfaith harmony for the establishment of lasting peace.

When Mr. Wahid and Mr. Ikeda met in Tokyo in April 2004, the two concurred that religion should be the wellspring of peace and dialogue, the path to peace. At Mr. Wahid's proposal, the two religious leaders are presently making preparations for an interfaith dialogue on Islam and Buddhism to be published in book form at a future date.

[Adapted from an article in the July 28, 2008, issue of the Seikyo Shimbun, Soka Gakkai, Japan]