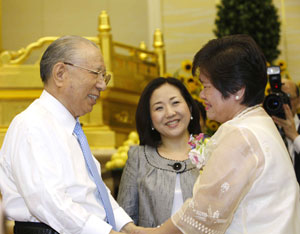 In his address, SGI President Ikeda spoke on a diverse range of topics, including the importance of promoting dialogue, effective and responsible attitudes of leadership, personal development and the necessity of fostering the younger generation.

During the meeting, the audience was treated to choral performances by student representatives and men's division members. Expressing his appreciation of the singing, Mr. Ikeda quoted Brazilian composer Heitor Villa-Lobos (1887-1959) who said, "People who sing are just a step away from happiness." Reminiscing about second Soka Gakkai President Josei Toda's encouragement of a culture of singing within the organization, he remarked that the songs of young people who cherish a commitment to truth and justice are like the sun's rays, heartening others and calling forth their own commitment to a fair and just society. In the same vein, Mr. Ikeda emphasized the importance of courage as the "foremost requirement for victory in life," and the core of faith in Nichiren Buddhism.

Speaking of the importance of fostering people's development, Mr. Ikeda asserted that the real treasures of a nation are not its wealth but its people. He shared an episode from the Chinese historical text Records of the Grand Historian by Sima Qian (Ssu-ma Ch'ien; c. 145-86 BCE): King Hui of Wei, bragging about his prized jewels, inquires of King Wei of Qi about the most valuable treasures in the latter's kingdom, to which King Wei replies that he has four exceptional and talented ministers who govern their territories wisely and expertly. Mr. Ikeda likewise referred to a statement by the great Japanese Buddhist teacher Dengyo (also known as Saicho; 767-822): "Who, if not the bodhisattvas [those committed to altruistic action], are the treasures of the nation and the benefactors of the nation?" Those who take selfless action for others, for society, for the nation, and for the cause of world peace, Mr. Ikeda affirmed, are truly respectworthy "treasures of the nation."

Throughout his speech the SGI president returned to the themes of fostering the development of youth and encouraging their initiative. "Youth are the focus. This is the age of youth." He described the close relationship of trust between himself and his mentor, Josei Toda, and how Mr. Toda had fostered him.

Commending the youth of the respective SGI organizations for their growth and leadership, he spotlighted the SGI-Indonesia youth, who recently held a successful peace festival in collaboration with the Indonesian Youth National Committee (KNPI), Indonesia's largest youth organization with a membership of 90 million; he also commended exchange initiatives between the Soka Gakkai youth and the All-China Youth Federation, China's largest youth group.

Mr. Ikeda spoke at length about the educator, thinker and military strategist Yoshida Shoin (1830-59) and his disciple Takasugi Shinsaku (1839-67), both of whom survived various ordeals and persecutions to play an important role in ushering Japan into the modern age. The two men, and their important contributions to Japanese society, offer a model of the mentor-disciple relationship, a relationship of shared commitment that is at the heart of Buddhism and the basis of the SGI's development.

Describing his past, ongoing and planned dialogues with various prominent thinkers around the world, Mr. Ikeda explained his wish to help establish a "network of thinking people committed to protecting human dignity and the sanctity of life" around the globe, and to forge bridges of friendship between people toward the goal of lasting world peace. He observed that many philosophical works throughout the centuries in both the East and West have taken the form of dialogues, such as the writings of Plato and Confucius, the Lotus Sutra and Nichiren's famous treatise, "On Establishing the Correct Teaching for the Peace of the Land."

Dialogue, he stated, "offers a means for fostering mutual understanding and peacefully engaging in the noblest of intellectual quests" in a format that is more accessible to most than theses or scholarly dissertations. It is for this reason, he said, that he has put so much of his energy into publishing dialogues.

On the attitude of leadership, Mr. Ikeda emphasized that genuine leaders are those who actively seek to challenge their own limitations. "What matters is action, not rhetoric," he emphasized, asking those present to take the initiative to strengthen their commitment to concrete action for the welfare of others.