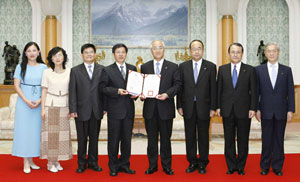 On July 22, 2008, Chungyu Institute of Technology, Taiwan, conferred its first honorary professorship upon Soka University founder Daisaku Ikeda in recognition of his contributions to global peace and the promotion of international exchanges in the areas of culture, education and the arts. The conferral took place at Soka University's Central Tower in Hachioji, Tokyo, attended by delegates from the institute--President Tang Yen-Po, Dean of Academic Affairs Chen Chang-Hsien, Accounting Office Director Chang Bao-Lin and Dean of General Affairs Chang Bao-Chin.

Chungyu Institute of Technology is located in Keelung City, a harbor city and a center of trade in the northernmost part of Taiwan. It was founded in 1967 as a two-year college at the proposal of Yu Youren (1879-1964), an educator and politician who played an important role during the 1911 Chinese Revolution together with Sun Yat-sen (1866-1925). Passionate about promoting education, Mr. Yu chose the site for the institute and guided its construction. In 1998, the institute was ranked by the Ministry of Education as a top commercial school and became a university in 2003. Today, 4,000 students study in its 12 departments and 4 graduate schools. The institute is the only university in the Keelung area with a business-information systems department.

President Tang said the university recognizes Mr. Ikeda as an exemplary leader for his dedicated commitment to enhancing education and public welfare based on humanism. In an acceptance speech read in proxy, Mr. Ikeda expressed his belief that the mission of universities is serving ordinary people, saying that this impulse is very much alive in the founding spirit of Chungyu Institute of Technology and in the character of its founder Yu Youren, who dedicated his life to fostering the well-being and happiness of the people.

[Adapted from an article in the July 23, 2008, issue of the Seikyo Shimbun, Soka Gakkai, Japan]