Tainan University of Technology, Taiwan, Honors Daisaku Ikeda for His Philanthropy and Vision for Creative Coexistence 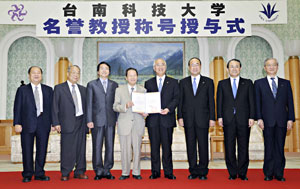 On July 24, 2008, Tainan University of Technology, Taiwan, conferred its first honorary professorship upon Soka University founder Daisaku Ikeda in recognition of his philanthropic activities and percipient vision for creative coexistence, hailing him as an influential leader of Eastern culture. The conferral ceremony took place at Soka University's Central Tower in Hachioji, Tokyo, attended by delegates from the Taiwanese university led by Trustee Board Chair Liu Ying-yeh and President Chen Hong-chu.

Tainan University of Technology was founded in 1964 as an institute of higher education for women. Presently, some 12,000 students are enrolled in its various faculties, including lifestyle technology, business administration, design and the performing arts. The university has an academic exchange program with Soka University in Japan. In summer 2008, it is set to reopen as a coeducational institution.

In his citation, Professor Chen stated that the honorary professorship recognizes Mr. Ikeda for his unprecedented efforts to protect human values, advance world peace and further cultural and educational exchanges. He stated that Tainan University of Technology has aimed to foster women leaders endowed with wisdom, moral fortitude, lofty goals and ideals, broad vision and competence, and referred to Mr. Ikeda's statements regarding the special contributions that women make to the development of society. As the university prepares to become coeducational, Professor Chen said it will remain true to its original mission of developing capable and compassionate leaders.

In his acceptance speech read by Soka University Deputy President Tadashige Takamura, Mr. Ikeda said he greatly appreciated being recognized by a preeminent center of women's education and shares the honor with the SGI-Taiwan members, who have made great efforts to contribute to Taiwanese society over the years. He referred to the father of modern China Sun Yat-sen's (1866-1925) belief in gender equality and the education of women as the foundation of civil rights. In this regard, he remarked that first Soka Gakkai President Tsunesaburo Makiguchi (1871-1944), who dedicated himself to advancing women's education in Japan in the early 20th century with a firm belief that women are the key to education and the builders of an ideal society, was Sun Yat-sen's like-minded contemporary. Mr. Ikeda also paid his respect to Mr. Liu, 90, whom he said embodies the university's philosophy of fostering knowledge and wisdom among students. He also expressed his determination to strive together with the university's faculty to advance education and create a future of peace and hope.

[Adapted from an article in the July 25, 2008, issue of the Seikyo Shimbun, Soka Gakkai, Japan]