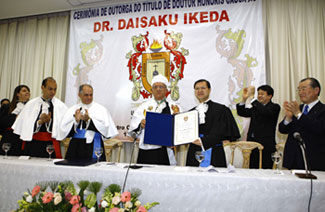 The Brazilian university Centro Universitário de Goiás, known as Uni-Anhangüera, has conferred the title of doctor, honoris causa, upon Daisaku Ikeda by unanimous decision of its Board of Trustees. Mr. Ikeda was recognized for his lifelong dedication to the cause of global peace and the promotion of human rights. Although it is rare for a convocation to take place off the campus, on June 17, 2008, a delegation from Uni-Anhangüera, led by Rector Joveny Sebastião Cândido de Oliveira, traveled from Goiânia in Goiás State to SGI-Brazil's Brasilia Culture Center to make the conferral.

In 1972, Rector Oliveira and seven other educators established Uni-Anhangüera with an aim of developing holistic, comprehensive education for fostering "humanitarian professionals" who will contribute to society. Presently, the university enrolls around 10,000 students.

Rector Oliveira presented the university robe and honorary doctorate for Mr. Ikeda to Mr. Ikeda's son, Hiromasa, who attended the conferral ceremony on behalf of his father.

In a citation, Rector Oliveira declared that Mr. Ikeda was being recognized as a leading figure of the twentieth and twenty-first centuries who has worked to promote the peace, freedom and human rights of all people. The rector also remarked that in a world where the impulses of greed and self-interest hold sway, Mr. Ikeda is striving to define and promote universal human values, and thereby discover solutions to the problems confronting humanity. He said it was a great honor for the young university to pay tribute to Mr. Ikeda, who has previously been recognized by a number of august institutions.

In a message for the conferral, Mr. Ikeda stated that the essence of humanistic education lies in igniting within each student the flame of wisdom. Wisdom can illuminate the darkness of despair, lighting a path of hope. It can transform problems and suffering into energy for advancement. Expressing his deep appreciation for the award, Mr. Ikeda pledged to continue his efforts to develop and promote humanistic education together with the faculty of Uni-Anhangüera for the sake of the youth of the world.

[Adapted from an article in the June 24, 2008, issue of the Seikyo Shimbun, Soka Gakkai, Japan]