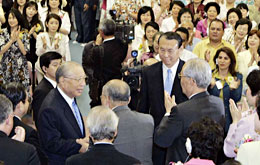 On June 18, 2008, Soka Gakkai held its monthly leaders meeting at the Tokyo Makiguchi Memorial Hall in Hachioji City, Tokyo, with the attendance of Soka Gakkai representatives from throughout Japan and SGI members from 14 countries and territories.

In his speech, SGI President Daisaku Ikeda spoke on a wide variety of topics, describing recent activities and achievements of the Soka Schools and discussing the correct attitude of Buddhist practice and leadership.

Mr. Ikeda related reports from Soka Gakkai members throughout Japan who are involved in environmental protection efforts in their local communities and described practical initiatives in environmental preservation and education in the Tokyo and Kansai Soka Schools and at Soka University in Hachioji. Students and staff there are engaged in activities such as cultivating fireflies, growing lotuses and planting and tending to cherry trees.

Thirty years ago, at Mr. Ikeda's suggestion, the Soka Schools began efforts to reintroduce the fireflies that once flourished in the area. Fireflies have long been celebrated in Japanese culture but their numbers declined drastically in the postwar era as a result of pollution and urbanization. From the few fireflies that were successfully bred by the schools in 1979, thousands flourish today, as witnessed at the recent annual Firefly Viewing Night at the Kansai Soka School attended by 1,000 local residents.

Near the beginning of his speech, Mr. Ikeda expressed his condolences to those affected by the Iwate-Miyagi Inland Earthquake, which occurred in mid-June in the northeast part of Honshu, Japan's main island. He said he was praying that they would be able to quickly rebuild their lives and communities, demonstrating the Buddhist principle of transforming misfortune into fortune and "turning poison into medicine."

Speaking to those confronting illness he said that from the standpoint of Buddhist practice it is important to regard illness as an opportunity to strengthen and expand one's state of life, enabling one to experience a more profound sense of happiness. Only those who have battled illness can truly understand and savor the joy of health.

Mr. Ikeda shared and commented on a number of aphorisms and quotations of historic figures such as Russian author Leo Tolstoy, who wrote, "The more challenging our circumstances, the more material they provide for our spiritual development," and the nineteenth century German poet Heinrich Heine, who wrote, "One is noble if one nobly feels and acts." Social status, wealth and educational background are irrelevant, he affirmed, as measures of a person's worth. Rather, it is a person's actions that count.

This egalitarian, nondiscriminatory spirit, Mr. Ikeda asserted, is fundamental to the continued success of the SGI's movement and of particular importance to its leaders. Nichiren himself considered his disciples as his equals, conferring upon them the most honorable titles as a measure of his respect for them, regardless of their social position or whether or not they were learned. In praise of the sincerity and courage of a particular woman follower, for example, Nichiren referred to her as "Sage." Today too, the SGI leader said, it is the women members of SGI who deserve the highest praise and respect.

Mr. Ikeda also expressed his determination to fostering youth, saying that this was his focus now. He asked the youth present to take initiative with the awareness of their responsibility for the SGI's continued development.