On March 5, 2008, Daisaku Ikeda, Soka Gakkai International (SGI) president, attended Soka Gakkai's monthly leaders meeting at the Tokyo Makiguchi Memorial Hall in Hachioji. Also in attendance were 250 SGI members from some 60 countries who were in Japan for an SGI symposium. 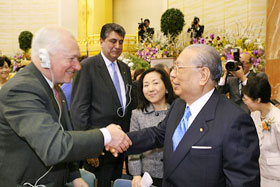 In his address, the SGI leader focused on the important role of youth in all spheres of life, drawing on the examples of eminent scientists Sir Isaac Newton and Albert Einstein who made revolutionary discoveries while in their 20s. He affirmed that it is the passion and energy of youth that will bring about a positive change for humanity.

Mr. Ikeda then shared the story of Kumarajiva (344-413 CE), an historic figure in the history of Buddhism whose translations of Buddhist sutras into Chinese played a vital role in the spread of Buddhism into East Asia. When his homeland was invaded, Kumarajiva was taken captive and imprisoned, but he continued to study during his long confinement, refining his understanding of Buddhism and honing his linguistic skills. Kumarajiva's sense of purpose sustained him through his years of hardship. When he was finally released from captivity, he fulfilled his youthful aspiration of aiding the transmission of Buddhist teachings to the east. Mr. Ikeda encouraged men in the audience to likewise overcome the difficulties in their life with a determined spirit and fulfill the goals and determinations of their youth.

It is through making earnest efforts to hold onto and realize one's dreams that one is able to create true value in life, Mr. Ikeda said, citing further examples from the life of the twice-honored Nobel laureate Madame Curie, and directing his remarks to women in particular.

Mr. Ikeda also shared the words of Chinese Premier Zhou Enlai, whose 110th birth anniversary fell on that day: "Generation after generation must be victorious, and each subsequent generation must be an improvement upon the former." The SGI president emphasized that genuine victory lies in continuing to triumph, and reiterated his belief in the importance of fostering young people.

"The seed of happiness resides in each person's heart. / If that seed is fostered, how big it will eventually grow! / The source of life lies within me. / I have no reason to long for some distant heaven." Citing this verse by the Ukrainian poet Ivan Yakovych Franko (1856-1916), Mr. Ikeda asserted that happiness is not something given to one by others, but something that one must cultivate in one's own life. One should not compare oneself with or envy others, he said. Sharing Nichiren's words, "It is the heart that is important," Mr. Ikeda expressed his hopes for everyone to cultivate rich and generous hearts, the cause of genuine happiness.

[Adapted from articles in the March 6 and 10, 2008, issues of the Seikyo Shimbun, Soka Gakkai, Japan]