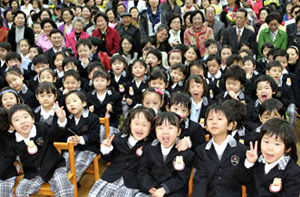 Soka Happiness Kindergarten, founded by Daisaku Ikeda, opened in Dongjak-gu, Seoul, South Korea, on March 15, 2008. The first 134 pupils, their parents and guests attended the opening ceremony together with the kindergarten's Principal Bark Seung-ha and teachers.

In a message for the opening, Mr. Ikeda warmly welcomed the pupils and their parents, expressing his hopes for the children to develop into happy, talented individuals who in the future could contribute to the development of society and help those around them also lead fulfilled lives. Referring to the student-centered Soka (value-creation) pedagogy developed by educator and first Soka Gakkai president Tsunesaburo Makiguchi, Mr. Ikeda has previously stated, "What our world most requires now is the kind of education that fosters love for humankind, that develops character--that provides an intellectual basis for the realization of peace and empowers learners to contribute to and improve society." This spirit is expressed in the kindergarten's motto, "Robust, Upright and Free."

The Soka school system is founded on the premise that the purpose of education is children's happiness. Soka schools are open to people of all beliefs and do not offer religious instruction. 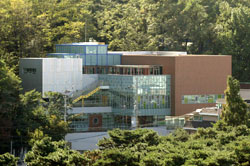 Expressing his delight at the opening of a Soka kindergarten in South Korea, special guest Dongjak-gu Municipal Council President Kim Sung-hwan said he concurs with Mr. Ikeda's educational philosophy and that he was inspired by the bright faces of the kindergarteners and their parents. Following a pledge by a representative teacher that the staff would devote themselves to the children's happiness, guests joined the children and teachers in singing the school song.

Surrounded by tranquil forests and open space, the school has been created to support the growth and development of the pupils in an unrestrained environment. Besides classrooms, the three-story facility has a spacious playground, multi-purpose halls and multimedia screening rooms. This is the sixth Soka-affiliated kindergarten established to date, following kindergartens in Japan, Hong Kong, Singapore, Malaysia and Brazil.

[Adapted from an article in the March 19, 2008, issue of the Seikyo Shimbun, Soka Gakkai, Japan]