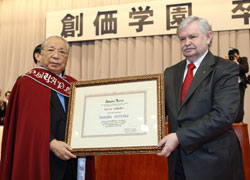 On March 16, 2008, on the occasion of the Soka Schools joint Tokyo-Kansai commencement ceremony held in Tokyo with a satellite link-up to Kansai, President Albert A. Likhanov of the International Association of Children's Foundations, Moscow, Russia, presented Soka Schools founder Daisaku Ikeda with the foundation's Children's Guardian Knight award for his tireless dedication to children's education and happiness. The award was created this year to commemorate the organization's 20th anniversary. Mr. Ikeda was chosen as the first non-Russian recipient. Mrs. Kaneko Ikeda received a certificate of appreciation from the Russian organization.

In his conferral speech, Mr. Likhanov lauded Mr. Ikeda for protecting and inspiring young people as well as those disempowered and underprivileged through his words and actions. Mr. Ikeda expressed his heartfelt appreciation for the honor.

Mr. Likhanov is also a leading author of children's books in Russia. The organization he heads has its origin in the Soviet Children's Fund established in 1987. The fund promotes activities that protect children's rights and provides medical and educational services for youth.

In 1996, Mr. Likhanov and Mr. Ikeda collaborated on a dialogue on education that ran as a series in the monthly Japanese educational journal Todai and was published as a book, The Path to the Land of Children, in 1988. 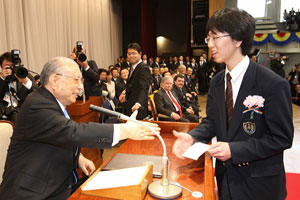 Mr. Ikeda encourages a graduate. During his commencement speech, Mr. Ikeda thanked Soka Schools graduates for studying at the school he founded, asking them to remember to appreciate their parents and develop into worthy individuals who are trusted by others. He advised them to cultivate their character and develop courage to surmount adversities in life, for in the final analysis life is what they themselves make of it.

[Adapted from an article in the March 17, 2008, issue of the Seikyo Shimbun, Soka Gakkai, Japan]