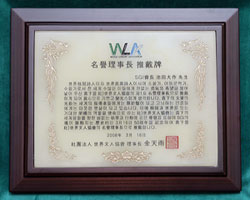 WLA is a worldwide network of writers and novelists, with chapters in 70 countries. The association supports and encourages pure literature, developing exchange and collaboration among its members and promoting their work.

In her conferral speech, Ms. Kim expressed her pleasure in conferring the honorary title that recognizes Mr. Ikeda's literary achievements. Concurring with Mr. Ikeda's stance that poetry accurately reveals what lies in the heart and his emphasis that literature exists for the sake of ordinary people, Ms. Kim said she appreciated Mr. Ikeda's poetry for inspiring courage and hope.

In an acceptance speech read by Mr. Yamamoto, Mr. Ikeda thanked WLA for the honor, affirming that rich, vibrant literature, including forthright expression, is a great force that transcends cultural and generational barriers, inspiring a positive transformation within people and within society. Mr. Ikeda also expressed his commitment to strive to contribute to Korean-Japanese friendship through the written and spoken word.

[Adapted from an article in the March 21, 2008, issue of the Seikyo Shimbun, Soka Gakkai, Japan]