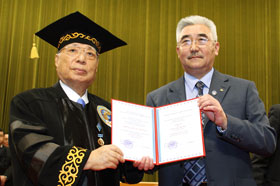 On March 21, 2008, the I. Arabaev Kyrgyz State University (KSU) of the Kyrgyz Republic in Central Asia presented an honorary doctorate to Soka University founder Daisaku Ikeda in recognition of his manifold contributions to education. The honorary degree was bestowed by KSU Rector Askarbek Bekboev during a combined commencement ceremony for Soka University (SU) and Soka Women's College at SU's main auditorium in Hachioji, Tokyo. Professor Syrtbay Musaev, director of the KSU Institute of Linguistics and World Civilizations, presented Mr. Ikeda with the KSU commemorative medal. Guests attending the ceremonies included a delegation from Soka Ikeda College of Arts and Science for Women in Chennai, India, headed by school chairman Sethu Kumanan, and a delegation from the International Academy of Indian Culture headed by honorary director Dr. Lokesh Chandra.

Founded in 1952 as a teachers college for women, today KSU offers coed education in some 80 fields through its nine colleges, faculties and research centers, including Kyrgyz language and culture, humanities, linguistics, information technology, history, sociology, law, education, the environment and tourism, economics and business administration. The university has an enrollment of 18,000 and a faculty staff of 1,000.

In his citation, Rector Bekboev remarked that Mr. Ikeda inherited and further developed the pioneering ideas of Tsunesaburo Makiguchi and Josei Toda, two eminent educators, and has provided a guidepost for resolving the problems of contemporary society with innovative insight. He said Mr. Ikeda's teaching is concise and lucid, and that through wholehearted dialogue he is steadily building global fellowship, peace and harmony.

Professor Musaev said KSU came to learn about Mr. Ikeda through SU graduates who enrolled in graduate and doctorate programs at KSU, beginning with Dr. Hironori Ito who heads KSU's Oriental Languages Department. He also remarked on Mr. Ikeda's writings on the Lotus Sutra and the Soka Schools founder's assertion of the Importance of a mutual interaction between religion and scholarship.

Expressing his deep appreciation for the honor bestowed upon him, Mr. Ikeda spoke about the philosopher I. Arabaev--after whom the university is named--and his pioneering efforts to educate people in their native language, while personally training teachers and spearheading a people's movement against the tyranny of authority. He shared a moving Kyrgyz tale called "Hope, the Supreme Medicine," about ailing parents who, moved by their child's deep love, are able to regain hope for living and fully recover their health. He urged the graduates to always treasure their parents and inspire hope in them. Referring to a Kyrgyz saying, "Learning is the wellspring of knowledge; wisdom is the light of daily life," Mr. Ikeda presented the graduates with the following mottos: "Learning is light," "Learning is a treasure," "Learning is the pursuit of truth," and "Learning leads to victory."

[Adapted from an article in the March 22, 2008, issue of the Seikyo Shimbun, Soka Gakkai, Japan]