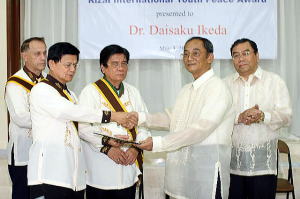 On May 3, 2008, the Order of the Knights of Rizal, Philippines, presented Daisaku Ikeda, SGI president, with its first Rizal International Youth Peace Award, created in commemoration of the 110th anniversary of Philippine independence. Mr. Ikeda was recognized for his dedication to the "moral and intellectual advancement of young men and women" around the world and for disseminating the ideals and philosophy of Dr. José P. Rizal, national hero of the Philippines, through his writings.

The Order of the Knights of Rizal is a fraternal organization founded in 1911 to uphold the ideals of José Rizal, a physician, philosopher, artist, writer and poet who played a key role in the Philippine independence movement and was executed by firing squad in 1896 at the age of 35. The Order has over 10,000 members in chapters around the world.

In a message, Mr. Ikeda expressed his appreciation for being the first recipient of the award and resolved to live up to the responsibility that it entails. He remarked that Dr. Rizal had placed his trust in the youth who possess, in Dr. Rizal's words, "a heart that loves nobility, a sincerely resolute personality, a mind capable of clear thought, fairness of actions, and love for compatriots." Calling Dr. Rizal "a sower of seeds" who constantly displayed this genius through his writings, dialogues and how he lived, Mr. Ikeda affirmed, "Immense is the power of a single youth who, armed with the principles of justice, resolutely takes a stand. The victorious and glorious drama of Dr. Rizal's life will continue eternally to inspire the lives of young people, encouraging them to greater efforts."

In his speech, Sir Esguerra stated that Mr. Ikeda's struggles to teach people how to create meaning and value concur with the principles upheld by José Rizal, and that both are champions of peace, freedom, justice and liberty.

Following the ceremony, Sir Francis Dela Cruz, Chapter Commander of Angono in Rizal Province commented on how unusual it is to find a Japanese man espousing his admiration for the ideals of Philippines' national hero. 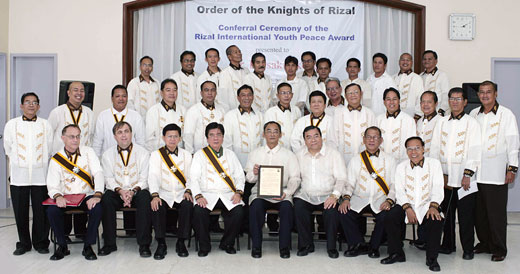 Mr. Cabautan (4th from right) in a commemorative photo with Order of the Knights of Rizal officers

[Adapted from an article in the May 14, 2008, issue of the Seikyo Shimbun, Soka Gakkai, Japan]