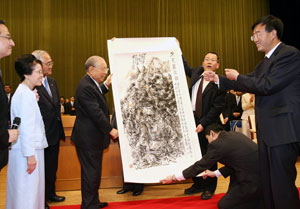 On May 4, 2008, Yan'an University, Shaanxi Province, China, conferred lifetime professorships upon Soka University founder Daisaku Ikeda and Mrs. Kaneko Ikeda. Mr. Ikeda was recognized for his commitment to world peace and Mrs. Ikeda, for her longstanding contributions through support of her husband's endeavors. The conferral took place at the main auditorium on the Soka University campus in Hachioji, Tokyo, on the occasion of a Soka Education alumni reunion, attended by Yan'an University Professor Wu Zhongyuan, vice director of the Academic Affairs Office, and Professor Li Dongsheng, dean of the College of Chemistry and Chemical Engineering. A delegation from the World Literary Association (WLA) of South Korea, headed by General Director Kim Cheon Woo, also attended. World-renowned jazz pianist and SGI Arts Division Leader Herbie Hancock, recipient of the 2008 Album of the Year Grammy Award, joined the celebration and performed an original composition in tribute to Mr. and Mrs. Ikeda.

Yan'an University President Lian Zhenmin was unable to attend and sent a video message conveying his joy in honoring the Ikedas with lifetime professorships. In a citation sent to the conferral read in proxy, President Lian paid tribute to Mr. Ikeda's deep commitment to education demonstrated by his establishing schools and institutions centered on the Soka Education philosophy to further the study of human existence, peace, and the natural environment, as well as foster world citizens. Mrs. Ikeda was honored for her part in the couple's lifework of advancing world peace and education.

In his acceptance speech, Mr. Ikeda expressed his deep appreciation for the honor presented to his wife and himself and lauded Yan'an University for fostering capable individuals with the motto, "Stand up for the people's sake and contribute through learning." He shared his earnest respect for both China and Korea, Japan's cultural benefactors, which suffered under Japanese imperialism during the first half of the 20th century. He stated that for Japan to truly prosper, it must forge friendly relations with both countries based on a correct view of history.

Earlier that day, a cherry tree was planted in front of Soka University's Central Tower and dedicated to Yan'an University in commemoration of the friendship between the two schools.

Founded in 1937, Yan'an University was the first comprehensive university established by the Chinese Communist Party. Some 15,000 undergraduate and graduate students study in 17 schools, 49 departments and 21 doctorate programs. To date, over 100,000 students have graduated from the university.

[Adapted from an article in the May 5, 2008, issue of the Seikyo Shimbun, Soka Gakkai, Japan]