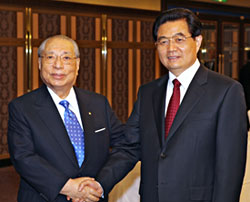 Mr. Ikeda presented President Hu with a Chinese poem as a symbol of their friendship and expressed hopes for enduring friendly relations between Japan and China.

Commenting on President Hu's speech at Tokyo's Waseda University earlier in the day, Mr. Ikeda expressed his full agreement on the importance of cultural exchanges between the youth of both countries for establishing genuine friendship.

President Hu expressed his happiness on meeting Mr. Ikeda for the third time. He thanked him for his courage in promoting Sino-Japanese relations, referring particularly to Mr. Ikeda's 1968 call for the normalization of ties between China and Japan. He said that even during times when the relationship has been tense, Mr. Ikeda has always proffered constructive suggestions from a broad historical perspective.

President Hu acknowledged that China has confronted various difficulties since embarking on an open economic policy, and that as a developing country with the world's largest population, its path toward becoming a fully modernized nation is long and arduous.

Mr. Ikeda first met with President Hu in 1985 when the Chinese leader was head of the All-China Youth Federation and led a youth delegation to Japan. For over 20 years, Soka Gakkai youth and the Youth Federation have held regular two-way exchanges, aiming to heal historical rifts and build mutual understanding.

Mr. Ikeda has visited China on ten occasions and promoted friendly relations between Japan and China for nearly four decades through cultural and educational exchange.

[Adapted from an article in the May 9, 2008, issue of the Seikyo Shimbun, Soka Gakkai, Japan]