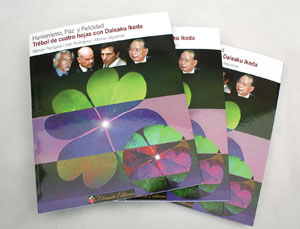 Scholars from Universidad Ricardo Palma (URP) in Lima, Peru, recently published Trébol de cuatro hojas con Daisaku Ikeda--Humanismo, Paz y Felicidad (Daisaku Ikeda and the Four Leaf Clover--Humanism, Peace and Happiness), which introduces Mr. Ikeda's ideals and accomplishments from the viewpoint of the book's three authors, URP Rector Ivan Rodríguez Chavéz, Dr. Manuel Pantigoso Pecero, a specialist in literature and philology and director of the university's extension courses, and Dr. Alfonso Jaguande D'anjoy, director of university relations, who holds two PhDs--one in political science and international relations and the other in education. The book's eight chapters, with titles such as "Culture, Teaching and Integral Education," "Religion and Buddhism," "Philosophy and Humanism" and "Human Rights," discuss Mr. Ikeda's philosophy of Buddhist humanism and his dialogues with world intellects and leaders.

In the book's foreword, Peruvian philosopher Francisco Miró Quesada Cantuarias comments, "The task of constructing the path to peace is a responsibility that [Mr. Ikeda] has taken upon himself with great earnestness. Peace, he says, 'grows and blooms in the heart of human beings.' Peace can only exist by battling egoism, evil and ignoble interests. His childhood experience of the tragedy of World War II fortified his spirit and resolve, developing him into the 'soldier of peace' that we know today."

The book's authors, Rector Rodríguez and Drs. Pantigoso and Jaguande, met Mr. Ikeda in Tokyo in July 1998 when they presented him with an honorary doctorate awarded by their university. Reflecting on that meeting, Rector Rodríguez said he was deeply moved by Mr. Ikeda's lofty character and concurred with his ideals, and that this encounter became the motivation for writing the book.

A reception commemorating the book's publication was held May 13, 2008 at the URP-affiliated Ccori Wasi Cultural Center with the attendance of 150 residents, university faculty and students. URP lecturer David Sobrevilla Alcázar and José Ignacio López Soria, former rector of the Universidad Nacional de Ingeniería, shared portions of the book and SGI-Peru General Director Carlos K. Shima read a message for the occasion from Mr. Ikeda.

[Adapted from an article in the June 1, 2008, issue of the Seikyo Shimbun, Soka Gakkai, Japan]