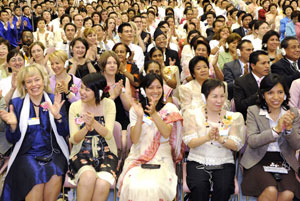 Overseas SGI members from 25 countries and territories at the meeting

On May 21, 2008, Soka Gakkai held its monthly leaders meeting at the Tokyo Makiguchi Memorial Hall in Hachioji, Tokyo, attended by representatives from throughout Japan and SGI members from 25 countries and territories. Together with other executive leaders, SGI President Daisaku Ikeda and his wife Kaneko Ikeda welcomed the SGI members and expressed appreciation for their traveling the long distance to Japan.

During his speech, Mr. Ikeda spoke about his mentor, second Soka Gakkai President Josei Toda, whose advice and insights he had, as a youth, always been careful to record. Sharing some of Mr. Toda's practical wisdom with the audience, he declared that success in any endeavor comes from first establishing a clear objective and being firmly determined to realize this without fail. This commitment determines the eventual outcome.

He also shared Mr. Toda's belief that true victors in life are those who experience great hardships and go on to surmount them.

In both life and faith, Mr. Toda once affirmed, one's conviction is of the utmost importance. Nichiren was a model of conviction. His persuasive power, moreover, came not merely from the ability to persuade but flowed from his compassion, a fact that is clearly evident in his writings.

As an example of some of the principles, Mr. Ikeda discussed the history of Takasugi Shinsaku (1839-67), a central figure of the early Meiji Restoration in Japan, who was imprisoned for opposing the political authorities of his time (the Tokugawa Shogunate).

Takasugi maintained his convictions in prison, inspired by the guidance of his mentor, great educator and reformer Yoshida Shoin (1830-59), who had told him that those who "speak out for truth and do what's right" may be held in contempt by others and lose their social standing, but if they forge themselves through such experiences and persevere they would eventually see their ideals realized.

Mr. Ikeda related that just as Yoshida Shoin had affirmed, Takasugi later opened the way for the Meiji Restoration, with his successors finally overthrowing the Tokugawa Shogunate that had executed Yoshida.

Quoting the words of Takasugi, "Though I might be confined in a cage like a bird, / my heart is free like a flowing river," Mr. Ikeda affirmed that the human spirit cannot be caged by power or authority.

The SGI president also quoted Indonesian writer Pramoedya Ananta Toer (1925-2006) who stated, "I now understood that these people [who eked out their existence on the land] were far stronger than I. They had the strength of iron; they were tempered by suffering," saying that it is the ordinary people, boasting neither position nor exceptional wealth, who are life's true champions and victors. Having only themselves to depend on, they pave their way forward in life with their own strength and mettle, unlike those who are born into power and wealth.

In his speech, Mr. Ikeda also described the diligent efforts of gardener Tadashi Sasaki who has successfully tended the cherry trees at the Toda Memorial Park in Atsuta, Hokkaido against all odds. When the park opened in 1977, experts warned that a variety of cherry trees known as Somei-yoshino or Yoshino Cherry, particularly beloved by the Japanese, had never grown that far north and would not survive Hokkaido's harsh winters. However, Mr. Ikeda had a deep wish to adorn the memorial park with the Yoshino Cherry that Mr. Toda had loved so much. In response, master gardener Tadashi Sasaki personally took on the challenge of raising the trees and, through meticulous care and much trial and error, has enabled them to thrive in the unaccommodating northern climate. This spring the 8,000 cherry trees in the park were in full bloom, enjoyed by the 1,400 people who attended the annual cherry blossom viewing party on May 13. Mr. Ikeda thanked Mr. Sasaki, now in his 80s, commending him for his quiet dedication over the years that made the impossible possible. "In every sphere of endeavor, people who keep striving and challenging themselves are admirable. Those who persevere win in the end," he remarked.

The monthly leaders meeting is broadcast by private television to Soka Gakkai community centers across Japan. May's meeting was, for the first time, broadcast via the Internet to remote islands and mountainous areas of Japan where it had previously been available only in audio broadcasts.