Graduation of Soka University of America's Class of 2008: A Vision of Education for Global Citizenship 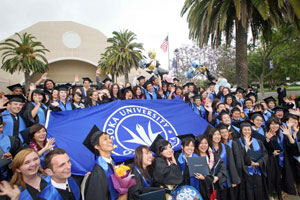 On May 23, 2008, Soka University of America (SUA), a nonsectarian undergraduate liberal arts school founded by Daisaku Ikeda, held its fourth baccalaureate commencement ceremony, completing what could be considered its foundational era. The university opened its Aliso Viejo, California, campus seven years ago on May 3, 2001. The 88 graduates from 13 countries were congratulated by some 1,800 attendees, including SUA alumni from the Class of 2005 through 2007.

Dr. Ved Nanda, vice provost for Internationalization and director of the International Legal Studies Program at the University of Denver, delivered the commencement address and Mr. Ikeda sent a video greeting and a message to the students and graduates.

Speaking on the university's mission to, in the founder's words, "foster a steady stream of global citizens committed to living a contributive life," Dr. Nanda explored the theme of a transmutation of "civilizational conflict to civilizational peace," looking at the role of elements such as intercultural encounters and dialogue. He remarked that Mr. Ikeda exemplifies the power of dialogue and has made dialogue the cornerstone of his work for world peace. Closing his address, he asked the graduates to remain true to their commitment to "serve your country and the world, and serve humanity," and charged them to never lose their idealism, compassion, enthusiasm and hope. 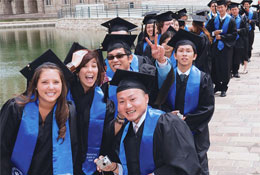 In his message, Mr. Ikeda applauded the graduates for the bonds of friendship they have forged among themselves. He described how Albert Einstein had been encouraged through a particularly difficult period of his youth by a friend. This friendship became a motivating force for Einstein's work and in the eventual development of his special theory of relativity. Asking the graduates to continue to cherish the bonds they have created at SUA, Mr. Ikeda said that, in the darkest times, true friendship is the greatest source of strength, and that, "No matter how far the world may slide into chaos and uncertainty, people can forge on as long as they have real friends who share the same purpose and ideals." He asked them also to continue to "share in and constantly reaffirm the ideals of Soka and the aspirations of your youth," while traveling the path of peace in the service of humanity and its collective future.

"It is my most cherished wish that all of you who have studied at Soka, a university born from the heartfelt prayers of and many contributions from ordinary people around the world, will cast the light of hope upon a world so desperately in need of it," he said.

In closing, he dedicated to the new graduates the following passage from the Indian poet, Rabrindranath Tagore: "Be true in your belief in yourself. A world of unsurpassed success becomes apparent when you break through failure. The path to future success lies in everyday struggle."