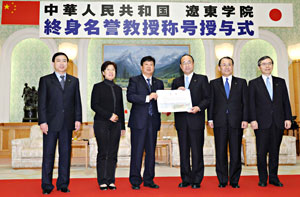 On May 30, 2008, Eastern Liaoning University (ELU) in Liaoning Province, China, conferred a lifetime honorary professorship upon Soka University (SU) founder Daisaku Ikeda. Mr. Ikeda was recognized for his longstanding commitment to promoting Sino-Japanese friendship and world peace as well as for his dedication to the education of youth. The conferral took place at the SU Central Tower in Hachioji, Tokyo, where ELU Party Secretary Li Shenghu entrusted the certificate to SU Board of Trustees Chair Yasunori Tashiro, who received it on Mr. Ikeda's behalf. Professor Feng Yadong, director of the ELU Administration Office, and Vice Professor Duan Wenzhi, head of the ELU Foreign Languages School, were also present.

Mr. Li remarked that it is a significant honor for ELU to appoint Mr. Ikeda, who has contributed in many ways to bilateral friendship between China and Japan, as a lifetime honorary professor of the university. In a message, Mr. Ikeda expressed his appreciation for the conferral and also extended his deep condolences to the victims of the Great Sichuan Earthquake with heartfelt prayers for the swiftest recovery of the affected area.

[Adapted from an article in the May 31, 2008, issue of the Seikyo Shimbun, Soka Gakkai, Japan]