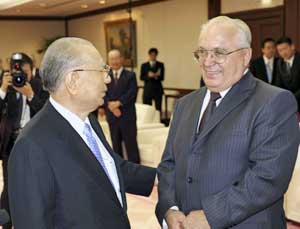 Rector Sadovnichy was in Japan to receive the Order of the Rising Sun, Gold and Silver Star, from the Japanese government for his longstanding contributions to cultural and academic exchanges between Russia and Japan as a member of both the Russian 21st Century Committee and a Japan-Russia think tank.

Mr. Ikeda and Rector Sadovnichy have met on various occasions in the past, both in Tokyo and in Moscow, and the two have collaborated on the publication of two dialogues on education in Japanese and Russian. Mr. Ikeda was awarded an honorary doctorate from Moscow State University in 1975 and an honorary professorship in 2002.

During their brief reunion, Mr. Ikeda congratulated Rector Sadovnichy for the award from the Japanese government, commenting that it bears deep significance not only for Russo-Japanese friendship but for global exchange in learning and education. He also lauded the Russian scholar, one of Russia's leading mathematicians, for his dedication to fostering protégés. Prof. Sadovnichy has supervised the dissertations of 65 candidates of science and 15 doctors of science, including scientists from Yugoslavia, Bulgaria, Algeria, Egypt and other countries. 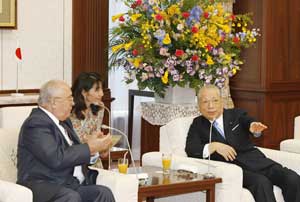 Mr. Ikeda thanked Prof. Sadovnichy for nominating him for the Russian Federation's Order of Friendship that was presented in February 2008 by Russia's Ambassador to Japan. Calling Mr. Ikeda an old friend and comrade, Prof. Sadovnichy expressed his wish to further their exchanges and collaborations.

Born in 1939, Rector Sadovnichy is a full member of the Russian Academy of Science Mathematics Department, a member of the Russian Academy of Science Presidium, president of the Russian Union of Rectors coalescing 700 Russian universities and other institutes of higher education, president of the Eurasian Association of Universities and deputy chair of the UNESCO Standing Committee in Russia. Prof. Sadovnichy was elected rector of his alma mater at the first democratic rector elections in 1992. During the tumultuous period following the dissolution of the Soviet Union, Prof. Sadovnichy was at the helm of reconstruction and reformation of education at Moscow University.

[Adapted from an article in the November 6, 2008, issue of the Seikyo Shimbun, Soka Gakkai, Japan]