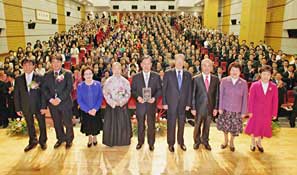 On November 9, 2008, Korean Traditional Music Association (KTMA), one of South Korea's leading cultural arts organizations, honored Daisaku Ikeda, SGI president, with a commendation for his efforts to advance Korea-Japan friendship and for his long-standing contributions to art and culture. The commendation was dated November 18, commemorating Soka Gakkai's 78th anniversary. A ceremony took place at the SGI-Korea (KSGI) headquarters building in Seoul, South Korea, with some 700 representative KSGI members attending.

The citation on the plaque reads in part: "Mr. Ikeda has dedicated himself to worldwide exchanges of culture and the arts, thereby fostering mutual respect and understanding between countries and peoples. Through the Min-On Concert Association which he founded, Mr. Ikeda has made vast contributions to introducing traditional Korean music to the Japanese public, thereby rendering great service to the strengthening of Korea-Japan friendship and the advancement of Korean music."

Established in 1961, KTMA integrated three music academies with an aim to safeguard and promote traditional Korean music. It has a nationwide membership of over 20,000 people. KTMA's international membership extends to Japan, USA, New Zealand and other countries.

[Adapted from an article in the November 14, 2008, issue of the Seikyo Shimbun, Soka Gakkai, Japan]