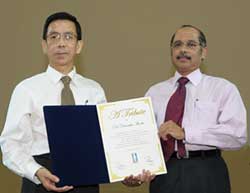 In a message conveying his appreciation for the honor, Mr. Ikeda expressed his determination to further promote friendly exchanges between Singapore and Japan and to work together with young people to open a path of peace and humanism. 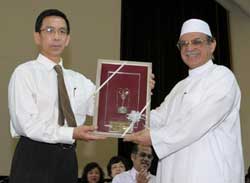 The Imam of the Ba'Alwi Mosque (right) presents a symbolic water well to Mr. Ong (left) for SGI President Ikeda

During the ceremony, Chairman Udairam ascribed the SSA's humanitarian activities to Mr. Ikeda's exceptional leadership in a tribute, which reads in part, "[Mr. Ikeda's] wisdom and untiring work which transcends countries, cultures and creeds is inspirational to others and indeed worthy of honor." In addition, Habib Syed Hassan Al Attas, Imam of the Ba'Alwi Mosque, presented an ornament in the shape of a water well. He compared the SGI leader's actions promoting trust and harmony to a spring that provides life-sustaining water to a parched desert.

Established in 2003, Mercy Relief is an independent charitable non-governmental humanitarian organization. It promotes compassion, care and volunteerism, bringing together people and resources to respond to disasters, poverty and inequity in Singapore and abroad. 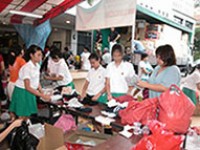 A number of prominent Singaporeans--both secular and religious leaders and activists--are on Mercy Relief's board of directors. In December 2004, SSA representatives, together with Soka Gakkai Malaysia, SGI-Sri Lanka and SGI-Indonesia, teamed up with Mercy Relief to provide emergency relief to tsunami victims in Sri Lanka. Around the same time, SSA and Mercy youth also spent over half a month in the outskirts of Indonesia and the Philippines to help repair orphanages and provide tutoring to the children as part of Youth Expedition Projects (YEP).


[Adapted from an article in the November 25, 2008, issue of the Seikyo Shimbun, Soka Gakkai, Japan, and an SSA report]