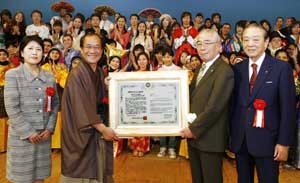 The award recognized Mr. Ikeda for having promoted intercultural understanding and strengthening friendship on a grassroots level, as well as contributing to Kyoto's blossoming as an international city of culture. It noted that in the 20 years since its inception, the annual student music festival has seen the participation of some 2,300 overseas students from 66 countries and territories.

Mr. Ikeda founded Min-On in 1963 with the objective of fostering peace through cultural and artistic exchange. Min(shu)-On(gaku) literally means "people's music." One of the concert association's core objectives is to make top-level performing arts from around the world readily accessible to ordinary citizens.

A December 2008 Japan tour of the Jordanian National Folklore Group marked the 100th country with which Min-On has engaged in exchange. Min-On's performances have spanned a wide spectrum, from folkloric groups to contemporary jazz and pop, to large scale productions such as the Milan Teatro alla Scala and the Royal Opera. The Hamburg Ballet will commence its fourth Min-On-sponsored tour of Japan in 2009.

Min-On has also encouraged the development of artistic talent through its Tokyo International Music Competition launched in 1966 for vocalists, conductors, contemporary composers and chamber ensembles. In 1973, at Mr. Ikeda's proposal, Min-On began a school concert program at elementary and junior high schools in remote areas throughout Japan, exposing school students to diverse global cultures through their performing arts.

The Foreign Students Music Festival in Kyoto is a further example of Min-On's efforts to foster bonds between people through music. Min-On, the Kyoto City Music and Arts Promotion Foundation and Kyoto Shimbun have cosponsored the annual festival for the past two decades. At this year's event, some 102 students from 17 countries and territories studying at universities and colleges in the greater Kyoto area presented traditional dances, songs and music of their respective cultures in colorful ethnic costumes. Min-On also cosponsors a similar event in Osaka. 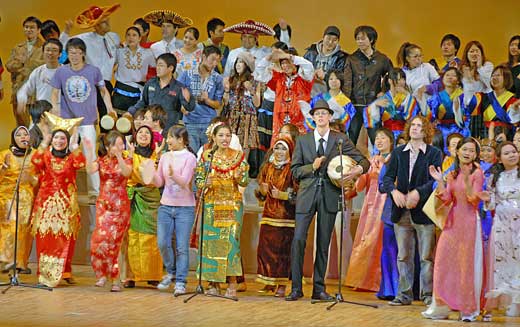 [Adapted from an article in the December 1, 2008, issue of the Seikyo Shimbun, Soka Gakkai, Japan]