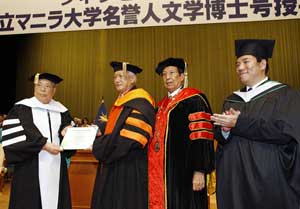 In his conferral speech, Dr. Lim shared that his dream of providing free higher education has been realized in Universidad de Manila, which, despite its critics, is now producing top performing students, whose examination scores surpass the national average. Indicating that UDM reflects his administration's commitment to education as a means for peace and progress, Dr. Lim stated that Mr. Ikeda is being honored for having the same commitment to education and for representing UDM's vision of "becoming a first-class university of globally competitive professionals and educational leaders." He commended Mr. Ikeda for founding 15 educational institutions worldwide, beginning with Soka Schools and Soka University in Japan, and succeeding in creating "a flourishing educational system that has the happiness of children as its core objective." He stated his agreement with Mr. Ikeda's view that concern for the growth and happiness of others is the essential spirit of education.

Expressing his gratitude and sense of responsibility upon receiving the honorary degree, Mr. Ikeda named his mentor, second Soka Gakkai President Josei Toda (1900-58), and British historian Arnold J. Toynbee (1889-1975) as the two individuals with whom he would like to share the distinction. Mr. Ikeda said Dr. Toynbee, who had visited Manila in 1956 and witnessed the still unhealed wounds from the atrocities committed by the Japanese military regime, had been inspired by the dauntless spirit of the Filipino people who had thrown themselves into reconstructing their nation. Observing their passion for education, Dr. Toynbee was fully convinced of a hopeful future for the Philippine nation.

Referring to the people-powered revolution of the Philippines in 1986 when ordinary citizens stood up in solidarity against an authoritarian government and accomplished a bloodless revolution, Mr. Ikeda identified Dr. Lim as the Police Major General who refused the dictator's orders to use force to disperse crowds and stood firmly on the side of the people. This people's movement, he said, ushered in a tide of global democratization and triggered the toppling of authoritarian states that followed in Eastern Europe.

Commenting that Manila was able to rise up and respond to the challenges stemming from the ravages of war and conflict and emerge victorious, Mr. Ikeda stated that the ability to win over adversities is the very source of development, advance, and creativity, whether for an individual, a society or a civilization. He quoted José Rizal (1861-96), Philippine's national hero, who asserted amidst persecution, "The school of suffering tempers the spirit." In closing, Mr. Ikeda asked the students gathered to remember to always cherish their parents, leaving them with the words of Rizal, "Only those of intellect and courage can lead lives of value and fulfillment."

[Adapted from an article in the October 12, 2008, issue of the Seikyo Shimbun, Soka Gakkai, Japan]