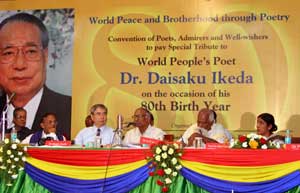 Dr. A. Padmanaban addresses the convention of poets

Some of India's well-known poets gathered in Chennai on October 11, 2008, to pay tribute to Daisaku Ikeda in commemoration of his 80th birth year. More than 50 poets expressed their appreciation for Mr. Ikeda's creative efforts and his contributions to peace, including Dr. Vai Balasundaram, former mayor of Madras and current chair of the World Poetry Society Intercontinental, and Kavivender Vezhavendan, former Tamil Nadu minister.

The event was organized by the World Poetry Society Intercontinental (WPSI), the Soka Ikeda College of Arts and Science for Women (SICASW) and Bharat (India) Soka Gakkai. Dr. N. Radhakrishnan, Chairman of the Indian Council of Gandhian Studies, delivered the inaugural address.

The convention began with a prayer by SICASW students, followed by a welcome address from Mr. S. Krishnan, editor of Poetry World and secretary general of WPSI. Mr. Krishnan recalled the meeting between his uncle, Dr. Krishna Srinivas, renowned poet and former president of WPSI, with Mr. Ikeda in Tokyo in 1979: "This meeting was a turning point in Dr. Srinivas's life. Upon reading Dr. Ikeda's works, he foresaw a great philosopher in him. He felt that the best thing he could do was to utilize his own monthly magazine Poet and the annual anthology World Poetry as vehicles to launch the works of Dr. Ikeda . . . Dr. Srinivas often said: 'The Himalayas have only one Everest. But Dr. Ikeda has several Everests in him.'" 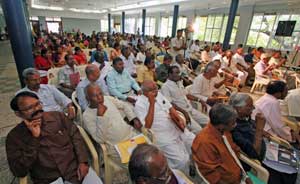 In October 2007, at the Symposium for World Peace, Harmony and Humanism, WPSI presented Dr. Ikeda with the title, World People's Poet.

Introducing Mr. Ikeda's poetry, Professor Syed Ameeruddin, WPSI vice president, said, "His poetry is a confrontation of his whole being with reality . . . Dr. Ikeda's poems display a very colorful panorama of varied subject matter like universal humanism, spirituality, wisdom and travel." He added that Dr. Ikeda is a poet who is optimistic about the universal establishment of such values as humanism, cultural coexistence and global harmony.

Dr. A. Padmanaban, former governor of Mizoram and president of WPSI called Mr. Ikeda "a poet of the people" and commended him for his dedication to building bridges of understanding and reconciliation between different nations.

Twenty-eight poets presented poems in English and Tamil during the course of the one-day event.

In her speech, Professor Rita Malhotra of Kamla Nehru College, Delhi University, remarked that Mr. Ikeda's poetry is charged with belief and inspiration. Dr. Ikeda, Prof. Malhotra said, places complete trust in humankind, particularly in youth. "He empowers us with his insightful perspective and words of encouragement . . . We are all here to reinforce his message, that peace is our goal, and we join hands to work towards it today, tomorrow and beyond all tomorrows."

[Adapted from a report by Bharat (India) Soka Gakkai (BSG); also reported in the October 28, 2008, issue of the Seikyo Shimbun, Soka Gakkai, Japan]