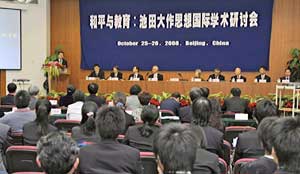 On October 25 and 26, 2008, Beijing Normal University, China, in collaboration with Soka University, Japan, sponsored an international academic symposium commemorating the 40th anniversary of Daisaku Ikeda's proposal for the normalization of Sino-Japanese diplomatic relations. Some 180 scholars and researchers from 47 universities and academic organizations gathered at Beijing Normal University's Yingdong Conference Hall for the conference that focused on Mr. Ikeda's philosophy on peace and education.

Many of the scholars who attended are affiliated with Chinese research centers dedicated to studying Mr. Ikeda's ideas and philosophy. There are more than 15 such centers at various universities and academic institutions in China.

In a keynote presentation, President Song Chengyou of the Daisaku Ikeda Research Center at Peking University described the insightful nature of Mr. Ikeda's proposal for Sino-Japanese normalization, which he said reflected a deep understanding of China's spiritual and cultural traditions. Mr. Ikeda's insistence on the need to explore Japan's relationship with China from a broad perspective and his corresponding view that Japan has a responsibility and mission to convey an accurate portrayal of China went beyond the platitude of describing China as Japan's benefactor and lent great weight to the proposal. Sino-Japanese relations have gone through many phases, he said, but Mr. Ikeda's fundamental perspective remains vividly relevant today as a viable philosophical ideal.

Other keynote presentations were made by Director Xiang Xianming of the Center for Comparative Education, Professors Tsuyoshi Takahashi and Masaru Higuchi of Soka University, Dean Shi Zhongying of the Beijing Normal University Graduate School, Professor Lin Tsai-mei, former president of the Chinese Culture University, Taiwan, and President Gu Mingyuan of the Chinese Society of Education.

Dean Zhong Minghua of the College of Education at Sun Yat-sen University in Guangzhou placed Mr. Ikeda's thought within a continuum of first Soka Gakkai President Tsunesaburo Makiguchi's "theory of value" and the unique perspectives presented by Makiguchi's disciple Josei Toda. Prof. Zhong described Mr. Ikeda's Buddhist humanism as a holistic, all-encompassing philosophy of life. He identified key conceptual elements as the "oneness of the universe and the self," the "indivisibility of the material and spiritual" (or, the non-duality of body and mind) and a philosophy of "happiness for oneself and for others." More significantly, Prof. Zhong affirmed, Mr. Ikeda has embodied these precepts in his own actions, demonstrating a viable path to solving the global challenges facing humanity.

Dean Wei Lixin of the Faculty of Asian Languages and Cultures at Guangdong University of Foreign Studies described Mr. Ikeda's philosophy as being firmly centered on the human being and stated that, in Mr. Ikeda's Buddhist humanism, value is determined in relation to the principle of respect for the sanctity of life.

In his message to the symposium, Mr. Ikeda reaffirmed that peace should be the ultimate aim of humanity, and education its fundamental path. He expressed his appreciation that the anniversary of his proposal for the normalization of Sino-Japanese relations was being marked, and he recalled his staunch resolve at the time of making the proposal to inspire youth to question the current state of affairs and rise to action for the sake of their future. He has continued to make efforts, he said, in the belief that education that nurtures awareness of the value of life, love of youth, and respect for other cultures is the key to humanity emerging from its path of destructive ignorance.

Mr. Ikeda referred to the four aspects of Buddha wisdom elucidated in the Lotus Sutra--to open the door of people's innate Buddha nature, show it, cause them to awaken to it, and induce them to enter its path. This is described as the fundamental reason for the Buddha's advent in this world. Tsunesaburo Makiguchi, he affirmed, applied this concept in his educational theory. Accordingly, the true meaning and purpose of education must not be limited to inculcating knowledge and information, but must empower people to harness knowledge and information for the sake of humanity's happiness and peace. Mr. Makiguchi believed that the objective of education is to inspire students to manifest their innate wisdom and to elucidate the value of life, an unsurpassed treasure. He also felt that just as it takes a diamond to polish a diamond, it takes excellent teachers to impart this ideal to students.

[Adapted from an article in the November 1, 2008, issue of the Seikyo Shimbun, Soka Gakkai, Japan]